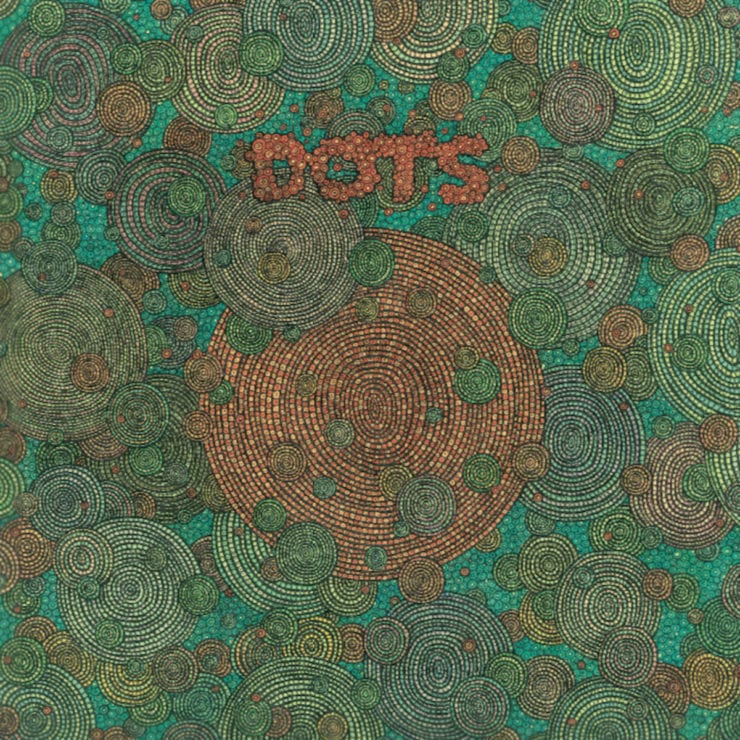 While best known for his ambient techno experiments as AtomTM or Atom Heart, Schmidt has dabbled in an impressively wide array of styles and aliases over the years. His Discogs page lists 70 different solo projects, suggesting either a restless, irrepressible creativity or a gnat-like attention span, depending on your viewpoint. These range in sincerity from the (ironically) profound drone of Superficial Depth to whacky electrolatina Kraftwerk covers as Señor Coconut.

Dots sits firmly at the dead serious, black-turtlenecked end of this scale. It’s a shimmering exercise in restraint, poise and cognitive infiltration; never overtly loud or intense, yet incredibly effective at worming its way to the depths of your psyche.

This is largely down to the framework of cerebral, Colundi-like bleeps and tweaks the album is built around. On ‘Friendly Cortex’, ‘Spinout Segment‘ and ‘Dense’ they swarm about you in slow motion like a scattered flock of glitchy, holographic pigeons, while elsewhere they’re deployed in a more subtle, measured fashion, as with the meandering melody on the 15-minute closer ‘Tonic Edge’.

These glacial highs are carried along by an equally heady, throbbing undercurrent. The formula is best applied on ‘Seaweed’, a long and winding excursion that sounds like it was cooked up on the same psychedelic camping stove used by the Chi crew for their best work. A base (bass?) of dub-soaked percussion dressed with delicate synth lines and seasoned with twinkling modular flecks – c’est delicieux.

‘Dots’ offers an altogether darker perspective; a hypnotic, psychoactive, distinctly sinister loop weaves its way throughout the track’s length, the trance intermittently broken by a jarring electronic slash. ‘Stain (Dot)’ is similarly ominous and rumbling, with the mix of sub bass and off-key chimes coming off like a warning of the rapidly approaching technological singularity.

Schmidt apparently described Dots as “elevator music” upon its original release. Well heck – get me to the elevators Uwe’s riding in! For me this is the music you’d find on the inside of an amniotic sac studded with flickering electrodes. Or maybe soundtracking a journey along some kind of ethernet cable water slide, the woozy, bleeping ambience massaging your neurons as you float weightlessly along in a thick cybernetic gel.

Like all the best Astral Industries releases – arguably all of their releases – Dots manages to sound as introspective as it does intergalactic, as intimate as it does infinite. It’s pervasive, poetic, kaleidoscopic music, repeatedly sending your mind into vivid spirals before gently manoeuvring it out again.

Uwe’s at the buttons and he’s asking you which floor – pick a number and let yourself be moved.

Discover more about Dots and Astral Industries on Inverted Audio.