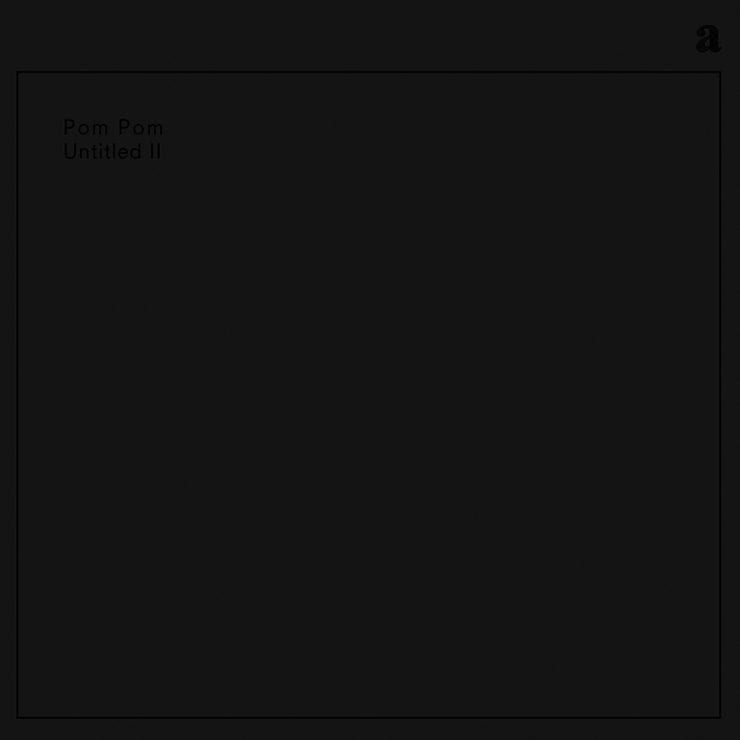 A bit humorous perhaps, but there’s virtually no humour in the music at all; listening to any Pom Pom record is like having Béla Tarr’s The Turin Horse in your favourite movies of all time list ten times over…which, fortunately for us, is friggin’ great. And even more fortunately for us, their new record, ‘Untitled II’, is a subtle trip deeper into what makes the artist tick. Essentially a direct sequel to ‘Untitled’, this LP is a black hole that you don’t see ahead of you until you’ve slipped into the event horizon.

The first thing the listener will notice, provided they listened to the last record, is that it picks up sonically where “Untitled 5” left off: with an absolutely radioactive wasteland to rebuild from. “Untitled 6” is terrifying, black, a negative. I don’t know what the folks in the sample way back in the mix are saying, but I can imagine it’s something similar to the sentiments expressed in, say, the dialogue of the film Salò. Who knows, maybe I’m projecting something far more sinister onto the art, but this is certainly music fit for an S&M session, as well as the couple of songs that bookend the end of the LP.

Whatever flora and fauna was left in the waste of the preceding track comes to the fore in “Untitled 7“, a playful-ish take on records like Kilchhofer’s ‘The Book Room’ or James Holden’s ‘The Inheritors’. The first real chugging bass and drum line on the LP arrives on “Untitled 8“, with a bizarre mix to show off. Why is the bass line and synth so low in the mix? Why do I keep craving this song like it’s the last piece of candy I’ll ever eat? This one only goes to show the strange magnetism Pom Pom has, a sweet flower barely peeking out of the soil for a very short time before it closes back up.

Featuring what appears to be some form of industrial southern hip hop, “Untitled 9” is even more interesting. Can we get a feature on this one, Houston? I could totally see Clipse/Pusha T all over this one, which is strange for how out-of-place yet totally-in-place it sounds for Pom Pom.

“Untitled 10” is the obvious post-punk track, hearkening back to a sound the artist has only previously hinted at pre-Ostgut-Ton. Dizzying and breakneck, like someone accidentally left the speed slider at +20% on a Technics, it leaves almost as quickly as it came. You can for sure catch me moshing to this one at the local goth party later this year!

Straightforward bangers don’t get missed on any Pom Pom LP, with “Untitled 11” forming a very grounded, very pop(!) backbone to the second half of the album. There’s not much to say about this one other than it could certainly fill a floor easily, and that’s absolutely a good thing. The next cut, “Untitled 12” could very well have soundtracked the regal march of Donkey Kong 64‘s King K. Rool in the final sequences leading up to the boss battle.

In keeping with the video game theme, “Untitled 13” is a throwback to stuff like Koji Kondo’s music for the Haunted House (LOL) level of Super Mario 64, all mixed in with percussive tropes more commonly found in “weightless” grime. This one is ridiculously slow, the chopped-and-screwed husk of the back half of Prince of Denmark’s ‘8’. “13” could pair well with Silent Hill 2 for sure.

Honestly, in the best way possible, this is the kind of album that makes you wish they would just lose their mind while the tape is rolling and make something far more aggressive and darker. Trust me: that’s not criticism of the artist at all. Pom Pom’s proved they can do it on records like the B-side on ’19’. Listening to any record from Pom Pom is to walk the edge of infinite blackness. After this one, I’m sore from the sonic beating, but aching for more. Harder, please!!!

‘Untitled’ is out now on vinyl and available for digital download, order a copy from Bandcamp.