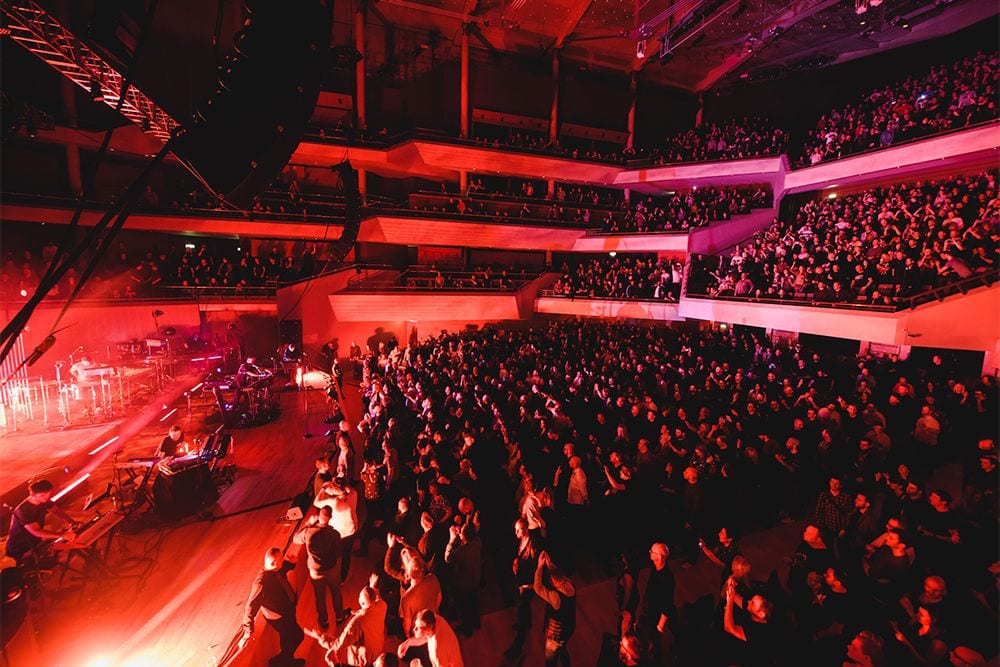 On a typically drizzly Mancunian Sunday evening, I walked down the side of Bridgewater Hall. In doing so, I passed posters advertising forthcoming performances of Brahms ‘Piano Concerto #1’ and Handel ‘The Messiah’. Rounding the corner, it was clear a different sort of event was taking place that night. A steady throb emanated from the building, a hefty throng of people already gathered outside and in, despite the doors only being open for ten minutes. The draw was the sole showing of Sasha’s live show outside of London, itself a limited encore by popular demand by punter and artist alike.

Refracted was originally a conceptual live show to follow on from his Scene Delete album for Late Night Tales, however the live performance bug proved one too infectious to resist. Accompanied by my Involver loving significant other, I pressed inside. Deep Dish ‘Future Of The Future‘ was pumping out of the speakers as the bar queue quickly moved from one to two to three deep. Surveying the crowd, it was a mix of late twenties to forties in attendance, with outliers of a family and elderly couples dotted about. By far, it was the Sasha hardcore that made up the main body of the attendees. “There are a lot of Simons here” quipped my partner.

With classical music running in the family, concert performances were not an uncommon feature in my youth. However there was a distinctly different energy on display tonight. When the five minute call broadcast over the speakers, a large majority of the crowd elected to stay outside of the auditorium in the bar. We dutifully made our way to the stalls. Inside, pockets of people sat or stood. Spread out across the stage -underneath an intimidating lighting rig – was the instruments for the performance – a Legoweltian array of synthesisers, an esoteric percussion section and six chairs for the string ensemble. 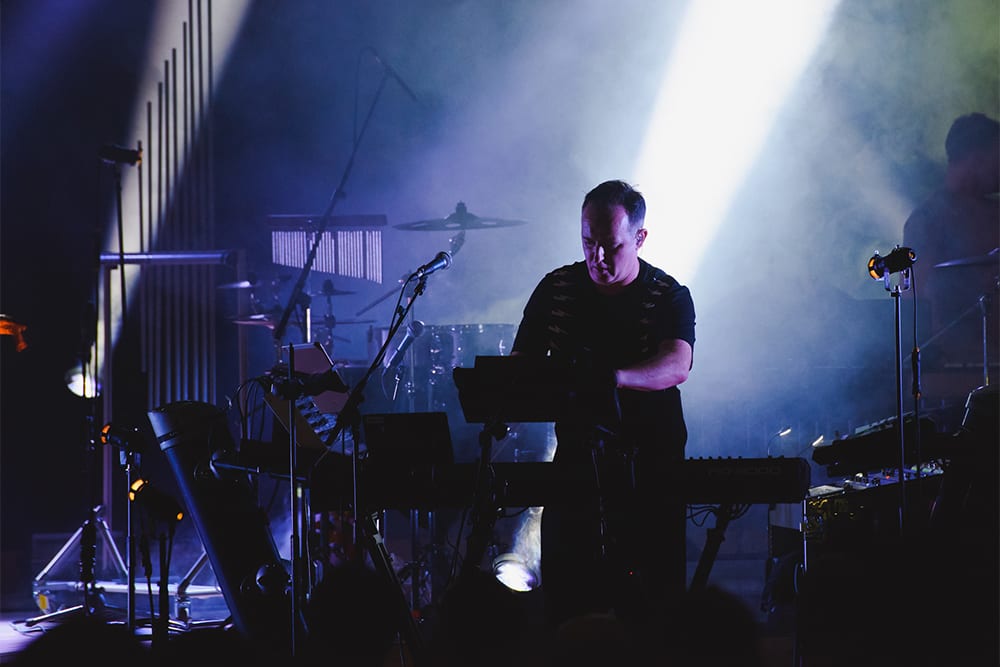 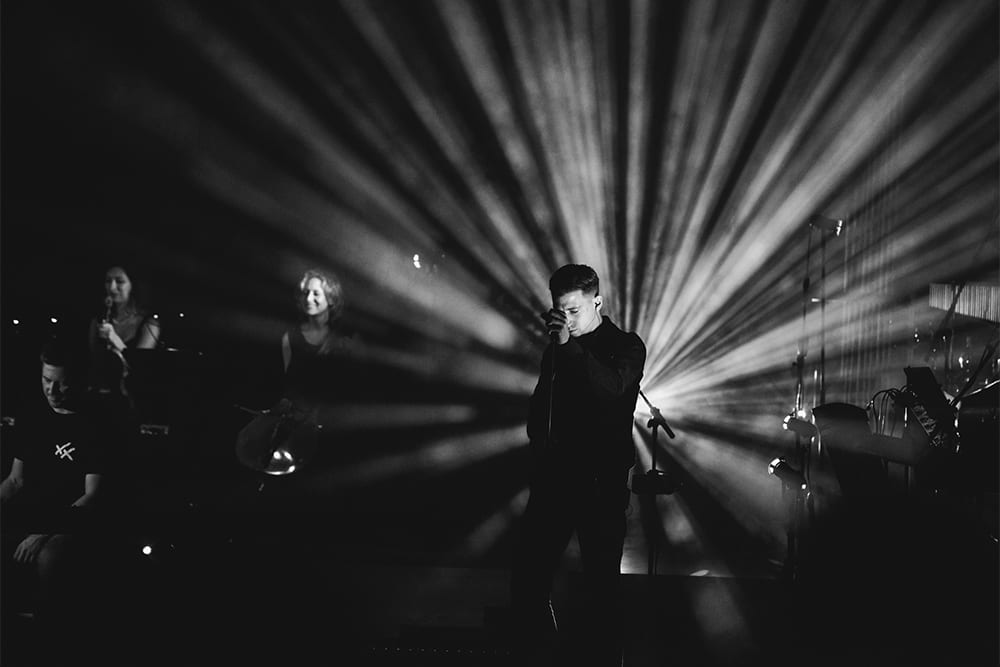 Before long, our attention was grabbed from a pair of narrow spotlights focussing on a figure at the front of the stage. Support act BAILE had begun his set. Those in the auditorium were treated to a warm and welcoming session of electronic house music, featuring, at points, music from his recent release on Sasha’s own Last Night On Earth imprint. With one hand working a midi-controller and the other wielding a drum stick being used to trigger samples, the performance was understated and graceful, befitting the venue. The hall gradually began to fill, BAILE drew to a close and quickly exited stage left. A brief pause for some last minute equipment adjustments and then the artists emerged to applause.

The original Refracted gig spent its first half exploring the ambient and soundtrack orientated works of Scene Delete. This show initially mirrored that of the Barbican event, with album opener ‘Channel Deq‘ used to set the scene. After this was a significant sidestep, a statement of intent, as we moved into Involver’s opening epic, the re-work of Grand National ‘Talk Amongst Yourselves‘. This kicked off the audience somewhat. Excited noises from my accompanying figure to the left, someone in the circle waving a football top emblazoned with “Sasha 1” on the back, a couple separated by distance – one half in bed with a facemask on – experiencing together over FaceTime. Within minutes people were on their feet in a movement that swiftly swept across the auditorium. “Up we go then,” I gestured in faux resignation to those sitting around me.

With the mood set, we began to dance through this refreshingly song led structure. Admittedly, this isn’t the first thing you think of when considering the works of Sasha, but it absolutely worked. A small pocket of space in the middle of the stage saw guest vocalists drift into the little movements of the night. Ultraista vocalist Laura Bettinson sparkled on ‘Bring On The Night-Time‘, 1403 brought a moment of delicacy with ‘Every Love That Ever Was‘ and filled in for former The Youngsters man Rodriguez Jnr. on prime Involver moment ‘Smile‘, plus John “Quivver” Graham also popped up for one of those calm before the storm moments on ‘Rooms‘. 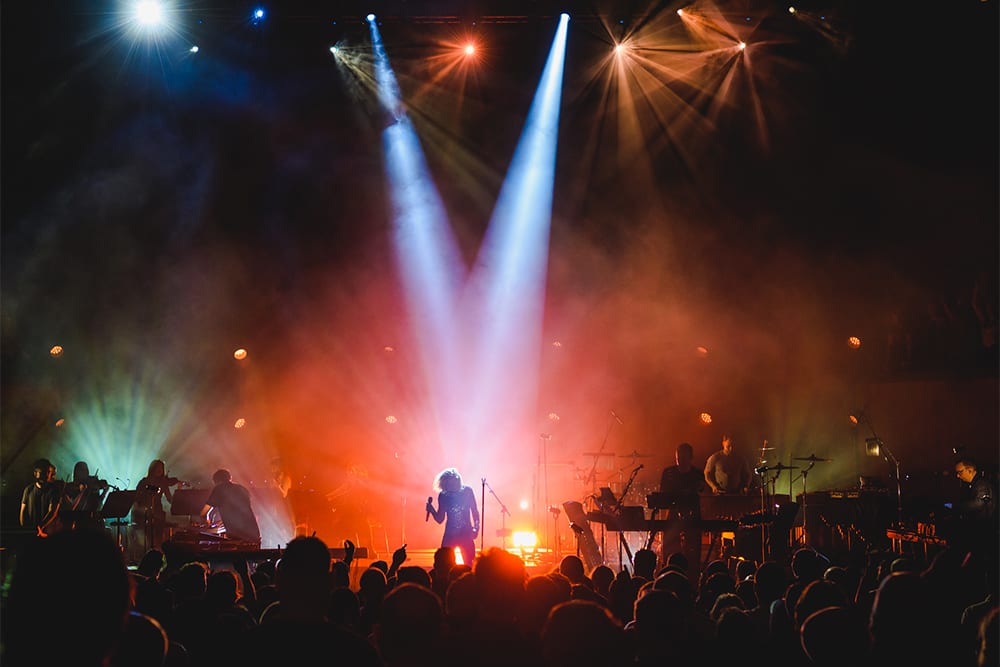 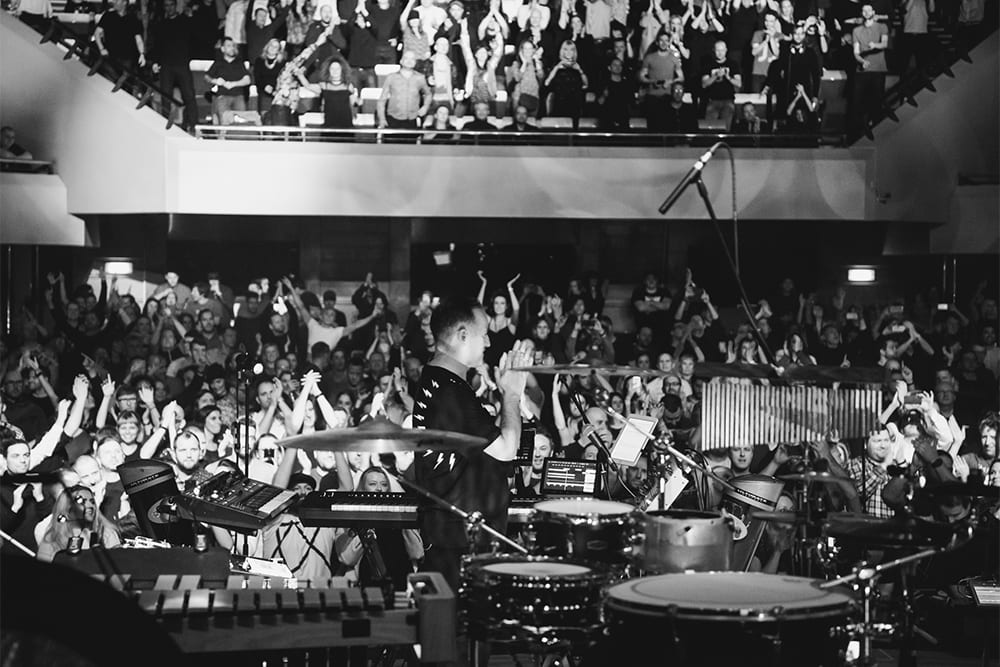 By far, the biggest impact was the sequence featuring Abigail Wyles – reprising Involv3r moment ‘Battleships‘ by Benjamin Damage – stepping through ‘Belfunk‘ and into ‘Out Of Time‘, with vocals supplied here by frequent guest to the stage Julie Daske. Speaking frankly, this was absolutely kicking. The key to success here was ‘Out Of Time‘ punctuating the sequence, as a track that somewhat stands apart from some of Sasha’s smoother moments with its ragged breakbeat and emphatic icy chords. This is one track that is going to have legs.

For the finale, it was now familiar territory along with the expected anticipation. ‘Wavy Gravy‘ is enjoying a bit of a renaissance as an anthem, helped in part as it fades to nothing but Charlie May’s superb piano outro. The big moment, as the Barbican’s encore, ‘Xpander‘ made its appearance to a rapturous fists in the air reception. The artists took their brief bows and left the stage. Then, after minutes that felt like hours, they returned for a brand new encore. Known only as ‘Track 10‘ and something that has featured in his sets over the last year, it was classic Renaissance material – the club not the classical era, naturally – full of big washing pads, progressive ad-libs and unresolved tension.

The lights came up, the gig was finished, and we melted out of the auditorium into the drizzle once more. The taxi journey home brought with it time for reflecting and a little gig post-mortem. Taking to social media, there were a few sentiments that London’s Roundhouse hadn’t provided optimum sound quality. Despite that, the attendees were in reverent high spirits. In comparison, Bridgewater Hall brought with it crystal clarity and an airiness not usually experienced in a basement sweat fest. What really made the evening was the vivacious audience. The anticipation, and delivery on said anticipation, crafted an infectious atmosphere that really got to you at the subconscious level.

All things considered, it begs the question as to what the live experience will mean for Sasha. Inside the studio, he has aspirations to bring traditional musicianship into the creative process, looking to spend more time in front of instruments with others than hunched over a DAW. His longevity has been through a career that has reinvented itself several times through catalyst moments and, each time, this has led to a purple patch. If history is any guide, then the future is going to be very interesting.

All photography courtesy of Anthony Mooney