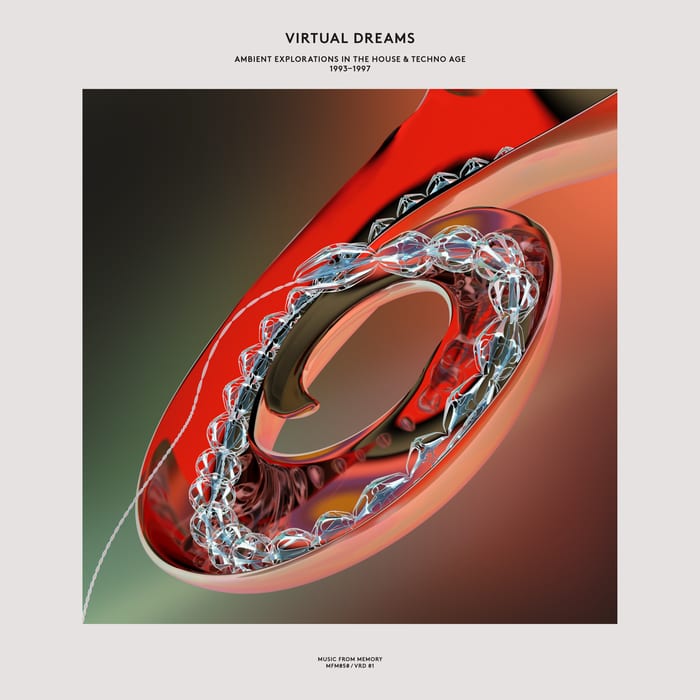 Dutch label Music From Memory has amassed a vaunted discography comprising original albums, niche compilations and rereleases of (often criminally) slept-on gems since its debut in 2013. Across its 50 releases, MFM has maintained formidable consistency in refining a sonic palette that’s vast in scope but often incredibly specific in terms of particular releases.

Given the eclectic nature of MFM’s releases, it’s superfluous to try to tether the charmingly amorphous label to particular genres. However, certain strands can be traced throughout its varied back catalogue. MFM’s 50th release, ‘Ambient Explorations In The House & Techno Age, 1993-1997‘ traverses two of these.

Firstly, it follows collections such as ‘Uneven Paths: Deviant Pop From Europe 1980-1991‘, ‘Outro Tempo: Electronic And Contemporary Music From Brazil 1978-1992‘ and ‘(The Microcosm) Visionary Music Of Continental Europe, 1970-1986′ in compiling arcane cuts from a very specific genre and epoch. Secondly, it focuses on ambient productions.

This is a fitting focal point for the label’s milestone release. MFM’s ambient output – viz. albums from Italian maestro Gigi Masin, ambient super group – hyperbole noted but well deserved – Gaussian Curve and the recent collaboration from Suso Sáiz and Suzanne Kraft, Between No Things – represent some of the label’s most revered releases, which have catalysed a resurgent interest in the genre (and dare I say an augmented appreciation from many listeners that there’s more to ambient than, say, the canonical albums from usual suspects such as Brian Eno and Aphex Twin).

As its title suggests, Ambient Explorations In The House & Techno Age, 1993-1997 is not a traditional ambient release. Rather, it approaches ambient through a house and techno lens. The compilation showcases tracks selected by MFM co-founder Jamie Tiller, which more than hold up almost thirty(ish) years on from their creation. One of the notable achievements of MFM’s half-century outing is the coherence it maintains whilst traversing the outer contours of the ambient oeuvre.

Serene beatless offerings such as Sun Electric’s ‘Love 2 Love’, MDA Analog’s ‘Rainful Memories’, and Space Time Continuum’s ‘Flurescene’ are complemented by more kinetic cuts such as LA Synthesis’, ‘Frozen Tundra Dub’, which ventures towards DnB rhythms, and Human Mesh Dance’s atmospheric foray into space house. UK luminary Richard H. Kirk’s ‘Oneski’ is another track that sits closer to the dancefloor in terms of arrangements, evincing the fine line between ambient and other subsets of electronica, a line that is blissfully blurred throughout this collection.

Some of the producers featured are best known for their output in other genres. For example, David Moufang, renowned for his club-focused productions under his Move D guise, contributes one of the highlights with ‘Sergio Leone’s Wet Dream’. LFO’s ‘Helen’, replete with intricate harmonies, epitomises what a chillout track should be; while the ‘chillout’ descriptor has been besmirched due to an excess of tawdry ‘chillout’ compilations, MFM050 showcases tracks from a time before the term was co-opted, and is a salient reminder as to the broader possibilities and potential of the genre.

Appropriately, ambient luminaries Tom Middleton and Mark Pritchard – collectively Global Communication – also feature with their remix of ‘Arcadian’ by Link (originally a Mark Pritchard solo project), a reworking that is laden with the subtle plangent melodies that suffuse the pair’s hallmark collaborations.

In keeping with MFM’s previous compilations, Ambient Explorations… is an impeccably well-thought-out curation of esoteric jewels that will either prompt seasoned campaigners to dust off obscure LPs or introduce neophytes to a range of pioneers. MFM050 will (further) ensure the persistence of Music From Memory as a mainstay on lists of labels to follow closely, irrespective of whatever directions Tiller et-al decide to venture towards next.

Regardless of your sonic proclivities, this compilation demands a close listen, especially given the post-COVID milieu and dearth of crowded dancefloors. Against the prevailing backdrop, it’s an ideal time to delve into this ambient collection for some necessary tranquillity.

‘Virtual Dreams: Ambient Explorations In The House & Techno Age, 1993-1997’ is scheduled for release 7 December via Music From Memory. Order a copy.