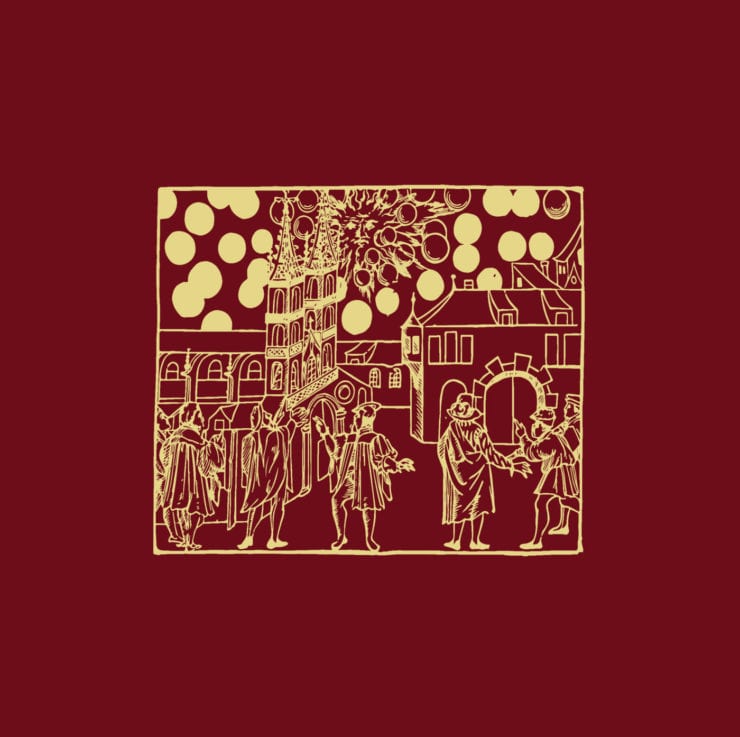 ‘’It happened in 1566 three times, on 27 and 28 of July, and on August 7, against the sunrise and sunset; we saw strange shapes in the sky above Basel.” – These words began a newspaper article written by Samuel Coccius, a local journalist documenting what is one of the earliest recorded UFO sightings.

This instance is also the inspiration for ‘Victory Over The Sun’, an album crafted by Dutch artists Wanderwelle – Phil van Dulm and Alexander Bartels – and Northern Electronics duo Bandhagens Musikförening – Michel Isorinne and Martin Sanders. The source material runs deep, from the titling of tracks to the deep red cover of the album that is emblazoned in gold with the illustration that accompanied Coccius’ article.

Based on his lucid description of the sun weeping tears of blood with black spheres moving at great speed through, the phenomenon is translated aurally over eight tracks, each chronicling the experience on an expansive sonic canvas. This is music for a vast sky where the light show is provided by Aurora Borealis, vertigo inducing and capable of shifting a mundane terrestrial perspective into one of microscopic existence separated only by the barest blue layer from an imposing and unforgiving expanse.

Moments like ‘Victory Over The Sun‘ and ‘Red Skies’ share a thread with techno, however it is being performed high in the stratosphere as you remain rooted, with kick drums and melodies hidden behind a thick blanket of imposing grey cloud. There is optimistic melancholy, like those moments in an eighties coming-of-age comedy where protagonists best laid plans have just collapsed and they are left to reflect at peace and regroup with intent, with ‘Before The Rain‘ and ‘An Unusual Sunrise‘ particularly coming to mind here. Then you get the appropriately grandiose, such as the sprawling ‘Emerging Sights‘ and ‘Celestial Crusade‘, a fitting soundtrack for music without boundary.

Paralleling the spectacle in Basel, the album is mesmerising, and it saves the best for last. Pivotally, its final moment – the closer ‘Eternal Dusk‘ – is like stepping out of the house one autumn fresh and barely lit morning, the fog of the previous nights’ dreams suddenly torn aside into startling clarity. Then, much like the residents of Basel, you are to reflect on what you have experienced as the dawn of normality creeps back in.

‘Victory Over The Sun’ is out now on Semantica. Order a copy from Bandcamp.