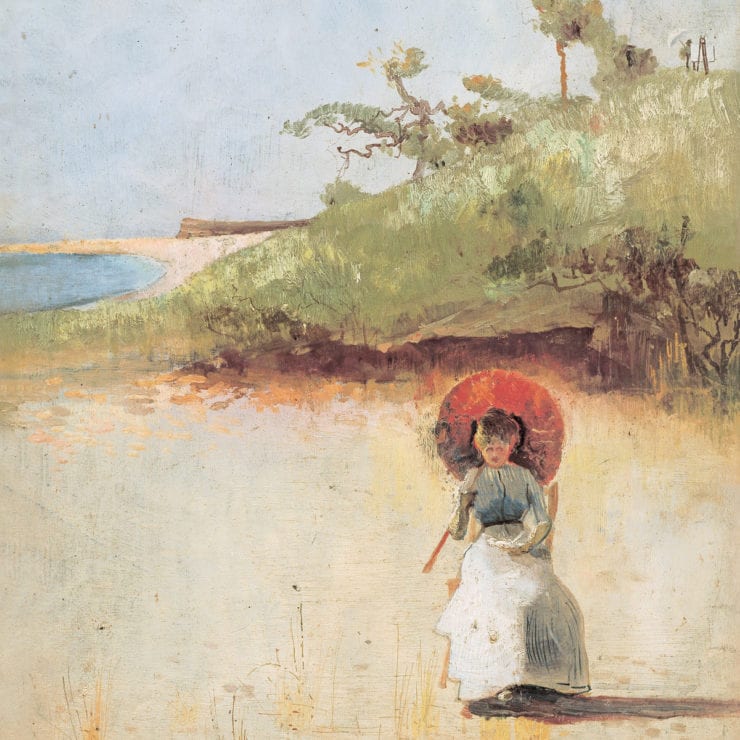 When I say IDM, you see…? A reclusive early internet enthusiast fiddling with an arsenal of software? Some unsettling imagery from the Aphex universe? A supercilious tweet questioning how one could even DARE use such a brutish and pointless term as ‘Intelligent Dance Music’?

Whatever, what doesn’t immediately spring to my mind is the kind of aaaachingly romantic scene depicted on the cover of ‘Still In My Arms‘, Bayu and Moopie’s glistening new survey of early-00s electronica. Just look at it. That bucolic palette, the brushstrokes, her contemplative downward-facing eyes, the peaceful, detached harmony of it all – oof!

It’s not that IDM is necessarily an unfeeling or soulless genre, more that its foundations lie in super-serious musical and technological progression. That artwork on the other hand; it just makes you want to reminisce about imaginary childhood sweethearts and sepia-toned holidays that never happened.

It would be an odd choice of cover, then, were this a collection of dancefloor scramblers informed by the relentlessly experimental ethos of labels like Rephlex, Warp or Skam – but it ain’t. ‘Still In My Arms‘ focuses on a more introspective and emotionally fraught side of the IDM scene. The emphasis is on melancholic, star-crossed melodies, which twinkle and twist above spry drum patterns. The tracks feel resigned, disillusioned, despairing, but beautiful, like a depressed 50s film star gazing listlessly into her cocktail.

Plod’s ‘Aptaxi’ captures that vibe perfectly, with bittersweet highs and honeyed dial-up tones swept along by a current of pulses and glitches. As with all the best moments on the album, the mood is poised between misty-eyed contemplation and metallic dynamism, as if the circuit board’s mourning the loss of a long-serving component. ‘11’ by MD stands out too; a sparkling exercise in slo-mo echo chamber electro that seeps in through the ears and nestles down as a warm, fuzzy feeling deep inside ya. Multiplex’s ‘Angles (Spark Mix)’ is the real stone cold swooner here though. Show me a more whimsical, melt-in-the-middle slice of electronica and I’ll show you a liar.

‘Still In My Arms‘ is the spiritual successor to ‘I Won’t Have to Think About You‘, a joyous collection of twee, jangly indie pop that Bayu and Moopie put out in 2017. While they’re worlds apart in texture and timbre, both compilations acutely detail the same sense of utter, helpless HUMANITY implied by those sighing, lovelorn titles. ‘I Won’t Have to Think About You‘ plucked at the heart strings with, well, mostly strings. ‘Still In My Arms‘ hits just as deeply, but uses tools made from binary code and dusty MiniDiscs.

These are songs that warm your heart as they break it. They make you want to dance, but in motionless, sombre awe. Maybe IDM is a useless term after all. The emotions that this album stirs up don’t feel intelligent anyway. They’re far more entangled with that dumb, irrational, feral condition you can only call love. Cute huh.

‘Still In My Arms’ is out now on A Colourful Storm. Order a copy from Bandcamp.