Upon reflection Terraforma clearly stands out as one of the most inspiring musical experiences I’ve had. Not only for the dreamy location, allowing you to experience some of the finest electronics in the gardens of an 18th Century Baroque villa in the North of Italy, but also for the hundreds of people converging from all over the world to share the same rapture for music, whilst freely expressing their inner approach to it.

The high-quality home-made food and attention to sustainability, but above everything that mystical bond between nature and sound have proven once again that music is not only something you hear but a physical vibration that shakes both the earth and skies in one go. Terraforma succeeded in that terraforming intent, giving birth to an idyllic world free of the bourns that would impede its expansion to weave the sound and universe as one. 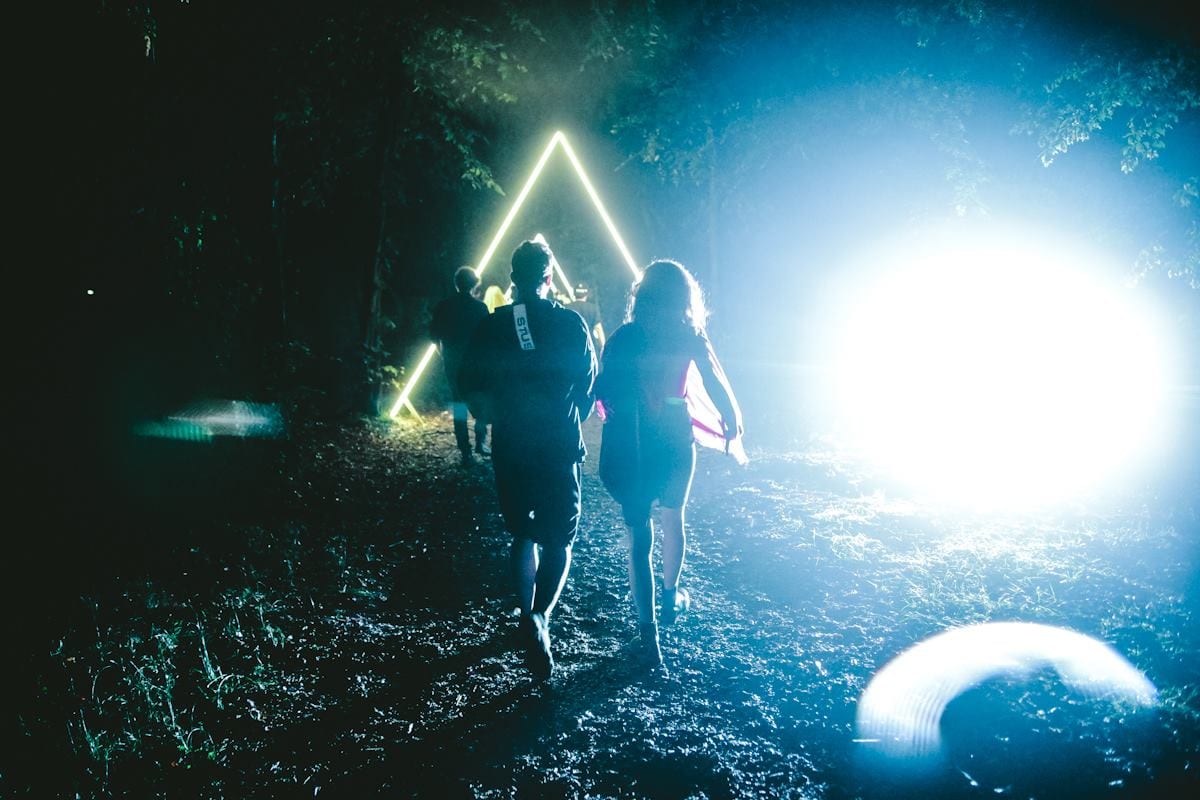 Night is already creeping in around Villa Arconati as I arrive, driving along the winding road that crosses Parco dell Groane, rimmed with tall swinging trees reflecting the vibes coming from Terraforma’s never-ending dance. The villa rises in all its magnificence in a warm yellow-tinted ambiance, an imposing ‘T’ letter made up of white lights branding the main door. I can already hear the music coming from inside the two centuries old walls that enclose the garden.

The path leading down to the main stage is a natural tunnel crossing the middle of the woods; soft leaves and grass deaden the shuffling steps and voices interlace along the growing vibrations of music as a sequence of huge led-clad triangles beacons the way. A tiny figure finally lines in focus and a clearing appears before my eyes, captivated by the hundreds of bodies dancing to Helena Hauff‘s brutal onslaughts of incendiary acid techno. 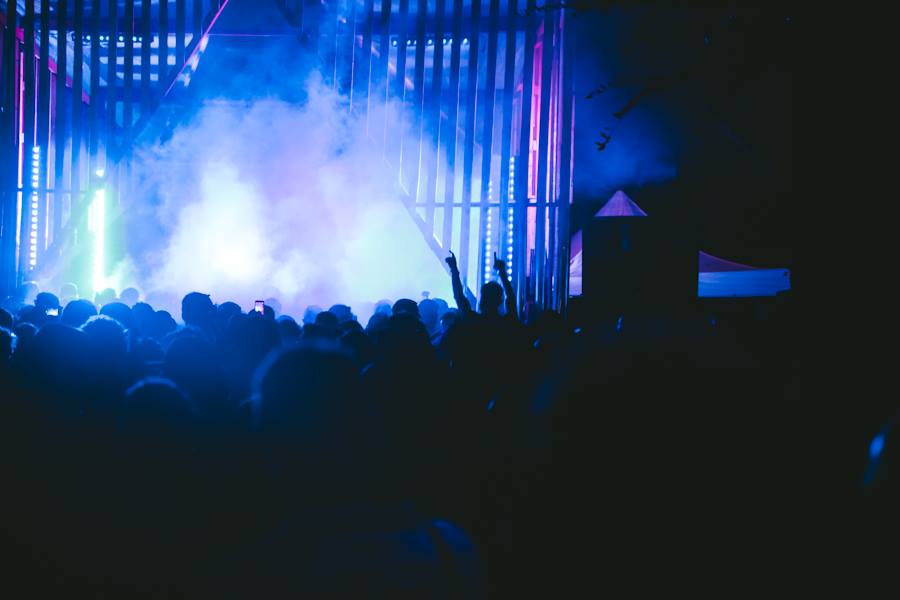 Hauff stands firmly under the silver-layered Pyramid Stage, wrapped in blue smoke bellowing from the intensity of her industrial beats. For the likes of Northern Electronics and EBM rawness of the Werk Discs affiliate, time seems to flow faster than the second’s clock hand when Terraforma’s Beniamino takes over for the last two hours of the festival’s opening night.

A staple of Terraforma since the very beginning, Donato Dozzy puts on a show that ranges from cosmic dub techno to warm lo-fi house and pitched-down breakbeat and when the clock hits 4am, nobody wants to leave. The crowd keeps pleading for more, completely bewitched by the soft yellow moonlight that pierces the dark sky. Terraforma has only just started. 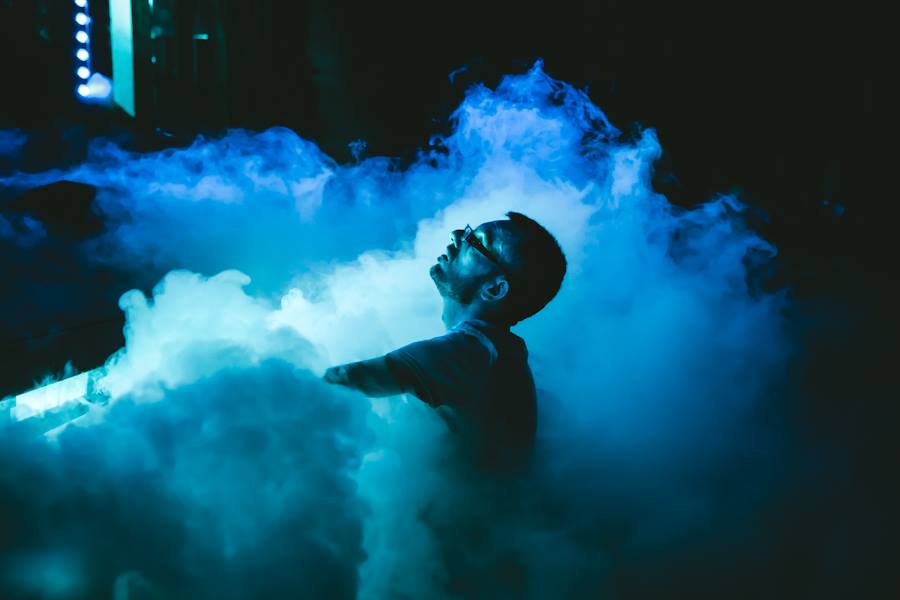 When I get to Villa Arconati on Saturday, the air is close, warm and sticky; walking from the station of Bollate leads me to discover the charming neighbourhood of the villa: the old houses where the workers of Galeazzo Arconati live, all nicely complemented with their own courtyard. Two old women chatting away, framed in their doorsteps, warn me that I need to go the opposite way.

Walking through the garden in daylight gives a totally different perspective of the amazing location where Terraforma takes place. I run into Enrico Malatesta chatting in a tiny clearing. The Italian drummer is seated in front of a cymbal, drum and he has a violin arch in his hand.

Spectators are either lying on the floor with their eyes closed, wrapped in a religious silence as he discourses on the interactions between sound, space and people, explaining his devotion to sound in its sheer essence and how he switched his attention from creating new sounds to learning from the ones that surround us.

“You can hear from a distance if a car is approaching on gravel or asphalt, sound is also information, it has a practical purpose” and maybe this is one of the things that makes Terraforma so special: the emphasis isn’t just given on singular sounds as a medium of enjoyment, or fun. It lies deeper, hidden behind that subtle intimate relationship between the crowd and performer. Barriers disappear, the crowd is sound as well. 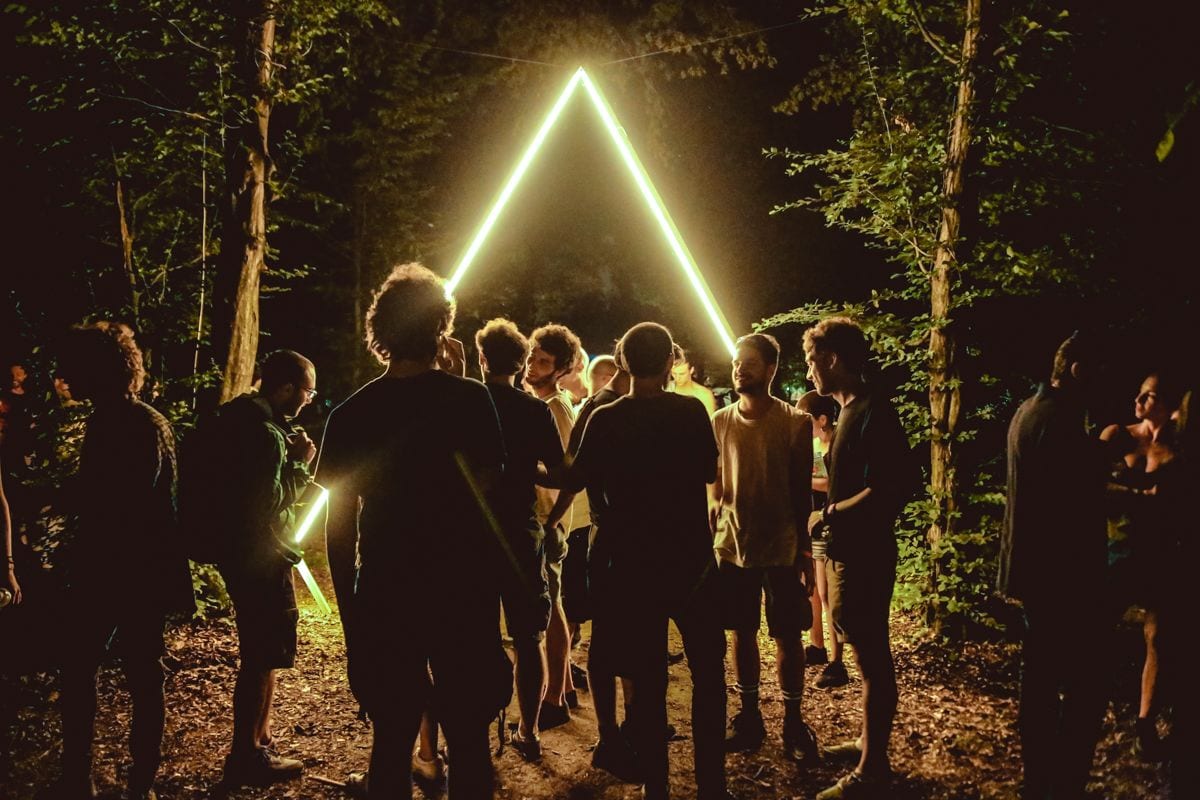 When Enrico Malatesta finishes his talk a sudden wind gust shakes the trees that surround us and hundreds of leaves start falling, spiraling over our heads. While crossing the green tunnel that leads to the main stage I start sensing a very powerful feeling, nature all around seems to come to life and the more I get closer to Dynamo Dreseen the more I understand what is happening.

The Acido Records owner is pounding the earth’s heart with heavy dub blends. Goosebumps set in, the ground vibrates and people dance in a trance as the music rises in intensity. It takes me a while to notice the thunder rumbling in the background, but nobody seems to care.

Rain starts falling and the delirious crowd remains in admiration, raising their arms towards the sky as they twist their bodies in motion. It’s hard to describe how powerful that 15 minute thunderstorm was, just imagine utter madness.

A crowd of dancers completely soaked through, fabric shimmering like snakeskin as Dynamo Dreseen shows no remorse for fiercely brutalising their senses with music, until he was forced to stop… It takes a while before the sun finds its way back into the trees. People sneak out from their hiding places and I don’t hear a whisper of complaints. 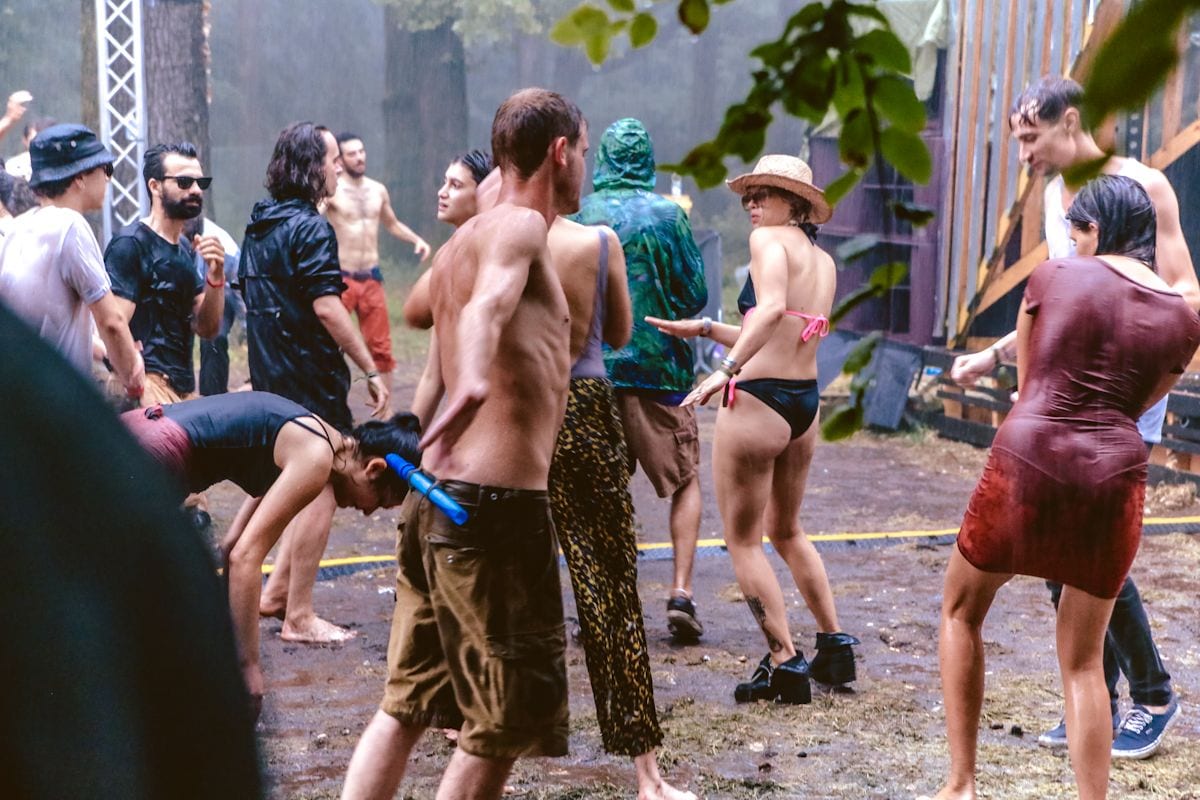 After a quick dinner of pesto crespelle, Flanger is on stage as a beautiful sunset takes control and a fresh breeze pushes out the heat. Ascending breakbeats get out of an iced cave, padded acid tonalities switch to minimal bubbling synths.

Right after Sensate Focus’ melodic jungle, Lee Gamble enchants the Terraforma audience: he is for sure one of the most anticipated acts lined up at the festival, unleashing grime and dubstep strike-force from the likes of DMZ and other Livity Sounds bassy wreckers. UIQ’s owner drowns Terraformers in a savage land where loud beats reign supreme.

Darkness is all around when Atom Tm and Tobias appear all dressed in black, with that german seriousness and infallible precision that characterises raster-noton. The duo introduces these last two hours with a long intro of wandering dark techno. Blue leds are the only lights of what looks like a dramatic space race towards The Black Widow.

The inward-looking soul of their live will slowly show up in all its magnificence, sounding as an everlasting track whose stumbling beat continuously goes up and down, teared from time to time by industrious sounds that bite without pity our inner silence, opening the doors of our heart and closing the ones of this second day of Terraforma. The public begs for an encore, clapping for almost ten minutes… Silence will soon be the protagonist of Villa Arconati’s garden. 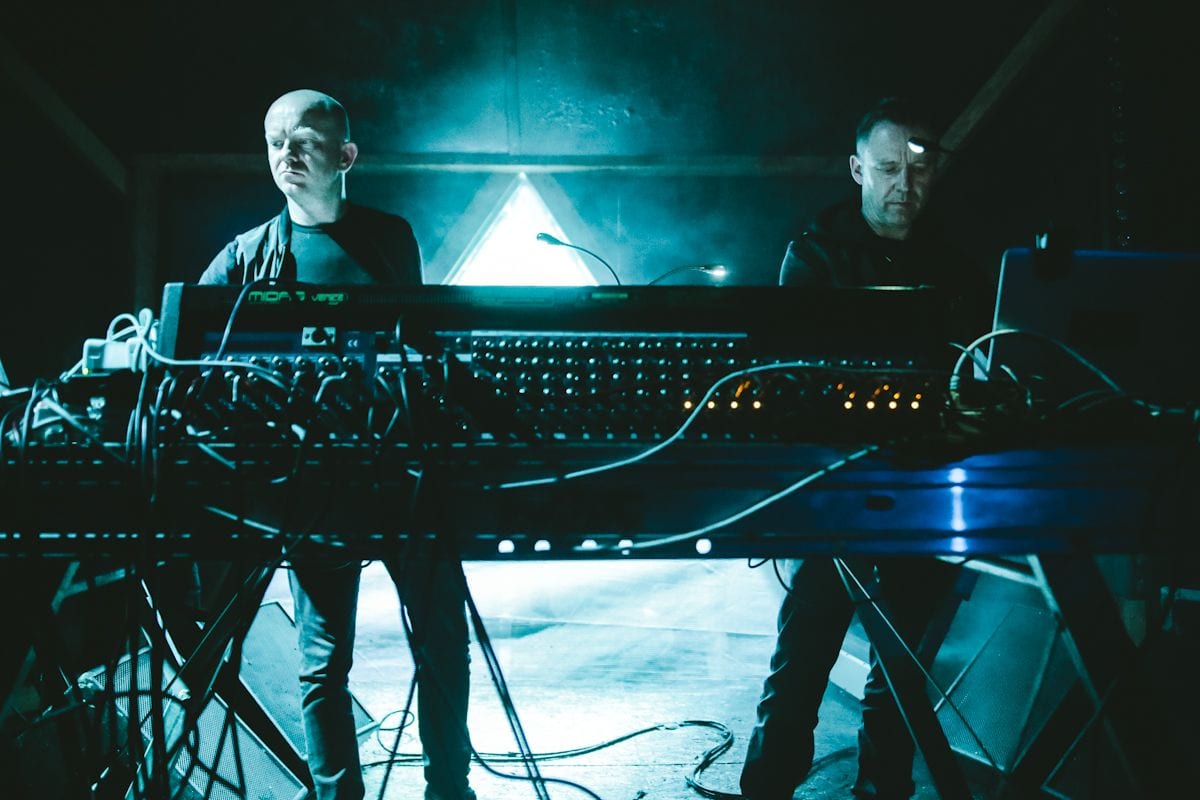 What’s better than waking up with a bright sunshine and some soft ‘reggae magique’ by Tropical Disco Soundsystem in a little clearing near the second entrance of the villa? After an invigorating breakfast with fresh fruits, home-made ginger, pineapple juice and a proper Italian coffee, I set my hammock near the Ti Pi stage to be devoured by its dubby vibes: people are enjoying the sun chatting, others are dancing, floating, collecting positive energy. 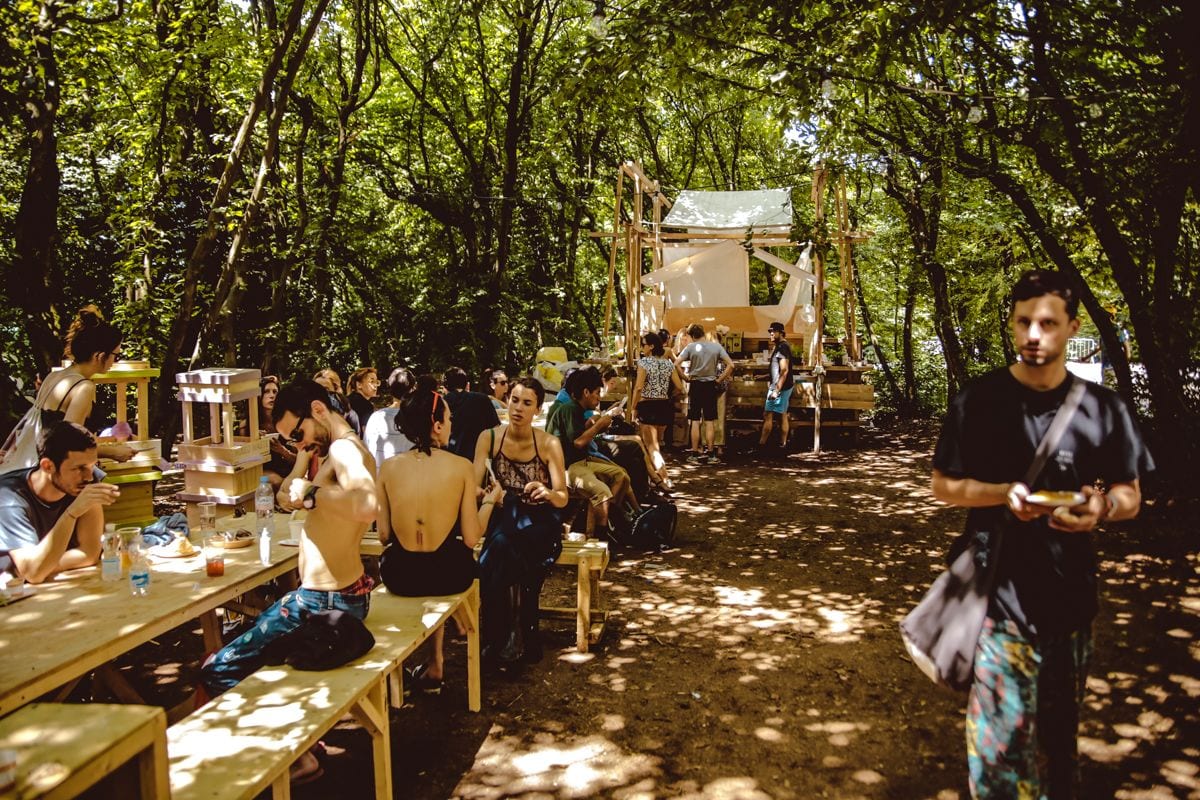 It’s hard to describe how mesmerising Beatrice Dillon‘s set has been: the English producer is probably one of the finest selectors I’ve heard recently, slowly starting with reggae to then turn Villa Arconati in an enchanted jungle where percussions mingle with what sounds like velociraptor shrieks, delayed minimalistic breakbeat, howling dub techno full of spilling hi-hats, 1 minute of hissing to then fall again into the jungle and afrobeat realms with Tony Allen.

Madness spreads when Tom Trago & Bok Bok’s ‘Need This‘ heats up the dance floor, Beatrice Dillon goes on with some minutes of funky paroxysms to then close her set with a touching Haitian folk song with cumbia echoes by Claudette and Ti Pierre. The English producer has definitely conquered her crowd, everybody is enraptured by those sounds coming from other eras, dancing barefoot with their eyes closed.

The scenario shifts again with Adrian Sherwood, as we’re getting back to the main stage: the mud has dried and left place to a perfect dance floor. As time unfolds I have more and more this feeling of nature completing the marvelous framework of Terraforma and everybody seems to feel connected by an invisible thread.

The English legend, founder of dub imprint On-U Sound, doesn’t disappoint: reggae is at the core of his set and Sherwood fiddles his mixer whilst fusing Jamaican tonalities with dubstep tints, hazard ska, heavy drum’n’bass and even Manu Chao’s ‘Clandestino‘ while speaking to the dancers with his microphone. He simply seemed to have as much fun as we did. 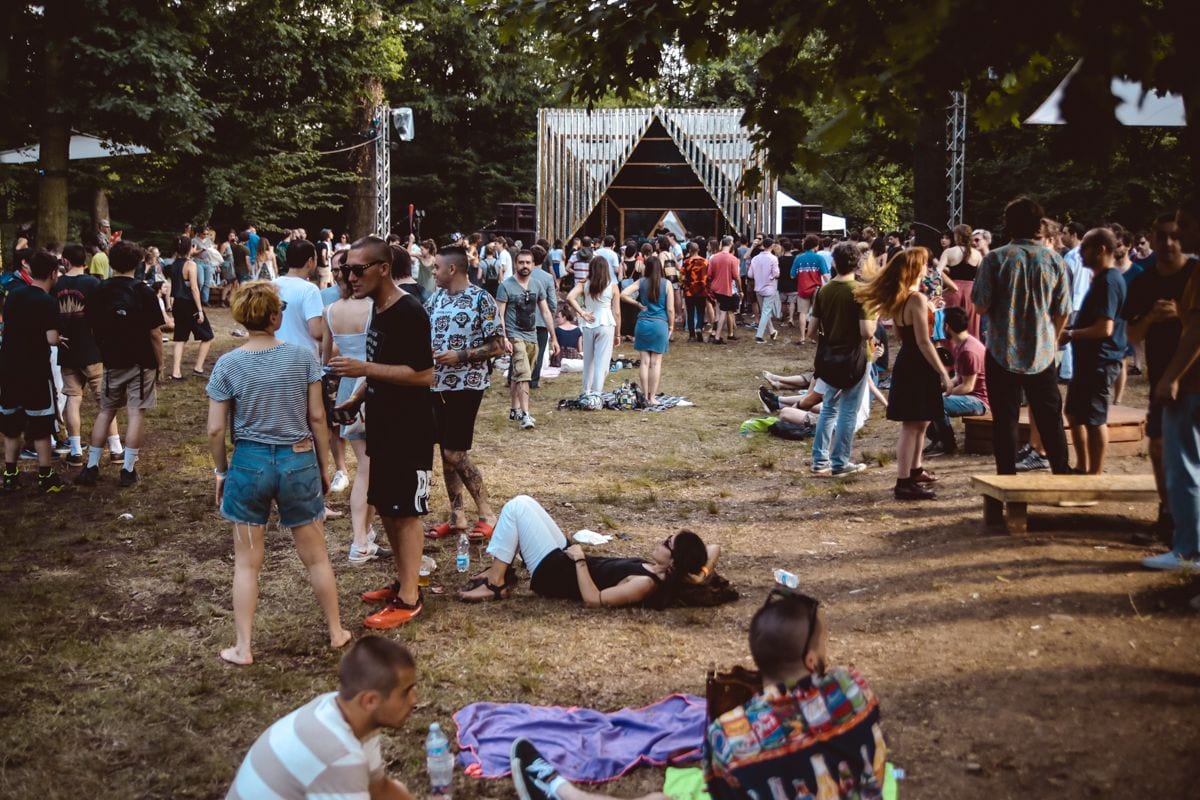 The mood definitely changed with Paquita Gordon. The Italian DJ is part of Terraforma since the festival’s origins and switches the vibe to proper electronic waves. Suddenly the festival looks like an intimate house party in the middle of the woods, coming to a closure through the notes of Ravel’s Bolero and The Beatles.

Last but not least: Primitive Art plunges everybody in sheer tribal madness with Jim C. Need taking care of the ragged and gurgling vocals – almost as a futuristic Pizia and Matteo Pit at the machines, spreading dub vibes or Chancha Via Circuito’s dynamic beats. 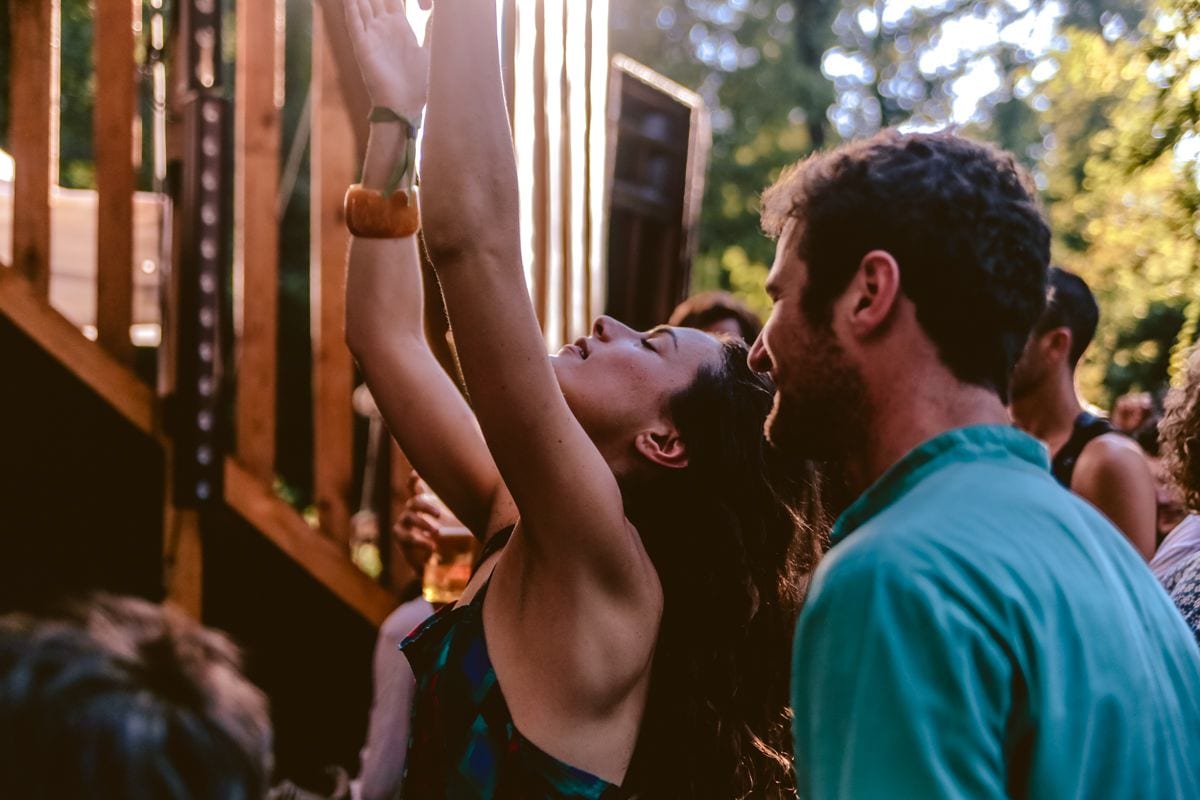 It might have been luck that rain didn’t allow the ERRATIC installation to close the festival instead of happening on Saturday. Taking place in the labyrinth and presented by BUKA, the swiss feldermelder was one of the most beautiful things of this third edition of the festival.

Consisting in five rows of four neon poles each, turning alive in the darkness as the music merges from the artists’ console, hidden between the led lights which were initially white to then switch to bloody red as fast moving incandescent matches, the audiovisual installation seems to reinterpret the forest in an inch-perfect live process.

Every sound recalls something different: branches cracking, a spider sneaking out to kill a fly, the mellow movement of grass or a thousand of crazed fireflies. Nature blooms in all its beauty, and I feel earth’s heartbeat and already some nostalgia sinking in. 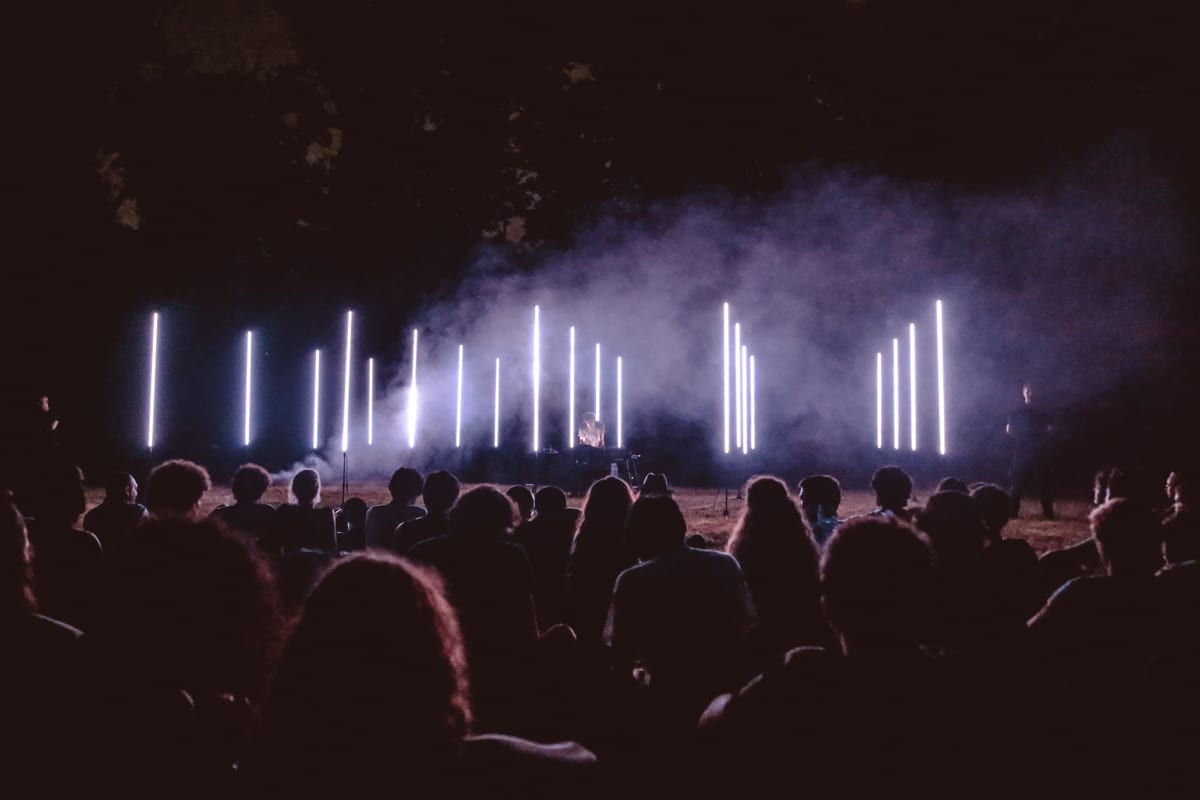 Rumours of a mysterious after party taking place on the camping site are quickly confirmed: the remaining Terraforma warriors head up to the little lake that stands right out of the villa’s wall. The console stands ahead of the water, hundreds little orange flames frame the lake as if fishes had lights in their stomach.

A flock of paper ducks suddenly appears, a well deserved round of applause starts for the Italian collective In Treatment who took care of the installations. Once again words couldn’t convey the sensations that Marco Shuttle‘s set spread among us: more than two hours (we wouldn’t let him go) of pleasure starting with hang drums through a deep techno escalation, a mystical wind blowing right through us, bringing that emotion-soaked music further and further.

Nocturnal synths going back and forth like boomerangs, mermaids chants of Ability II’s ‘Pressure Dub‘, caressing lo-fi house, before Boards of Canada ‘In A Beautiful Place Out In The Country‘ lowered a grandiose final curtain on it. Amen. 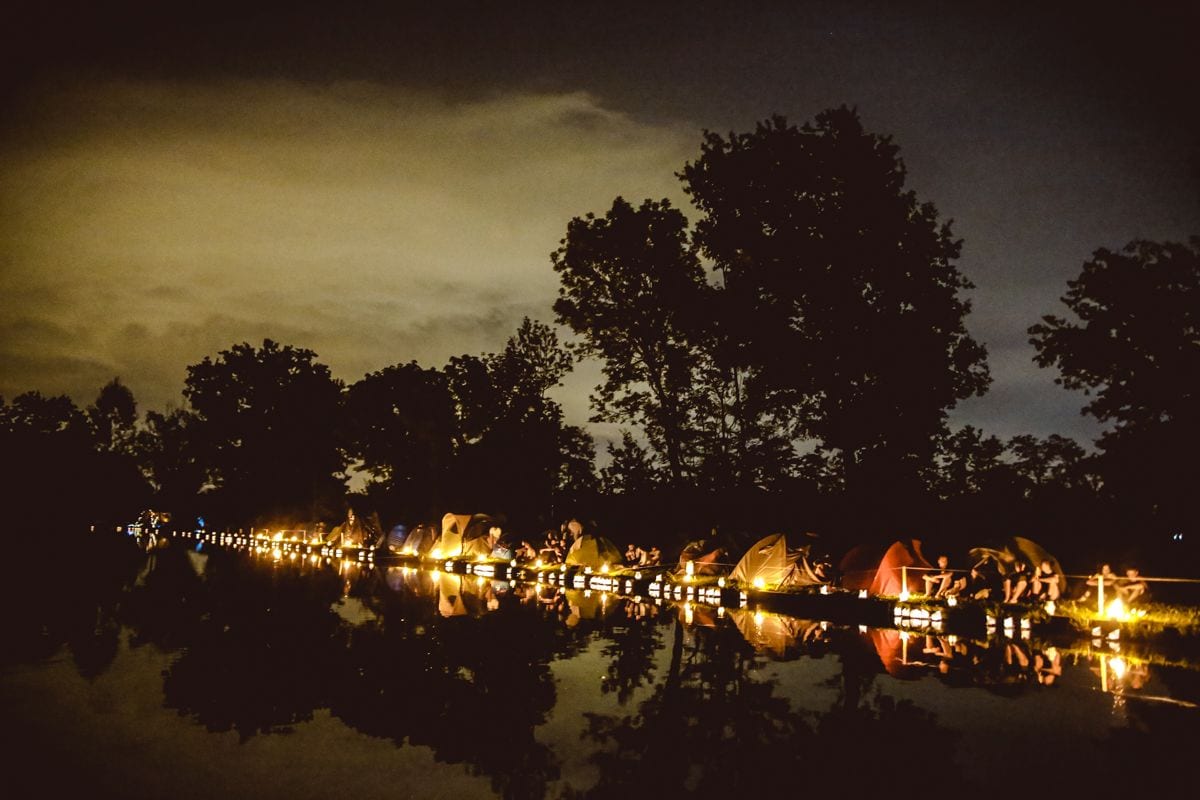 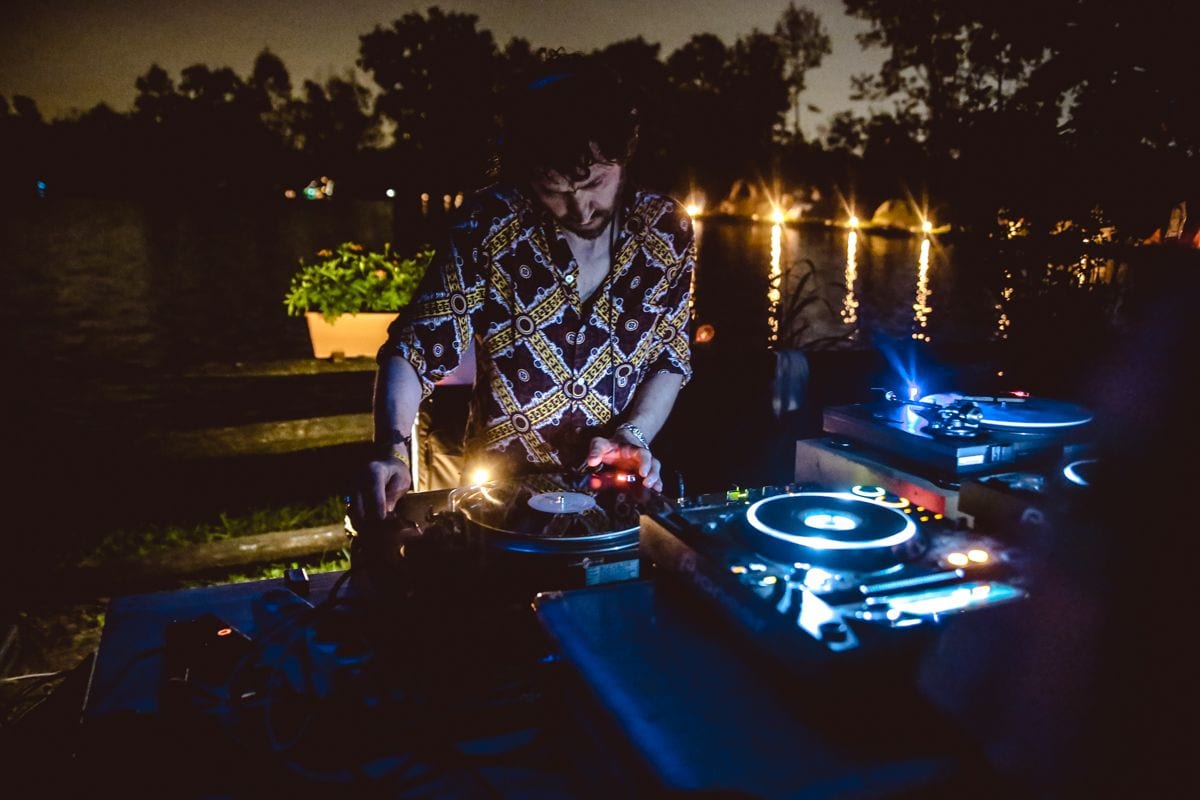