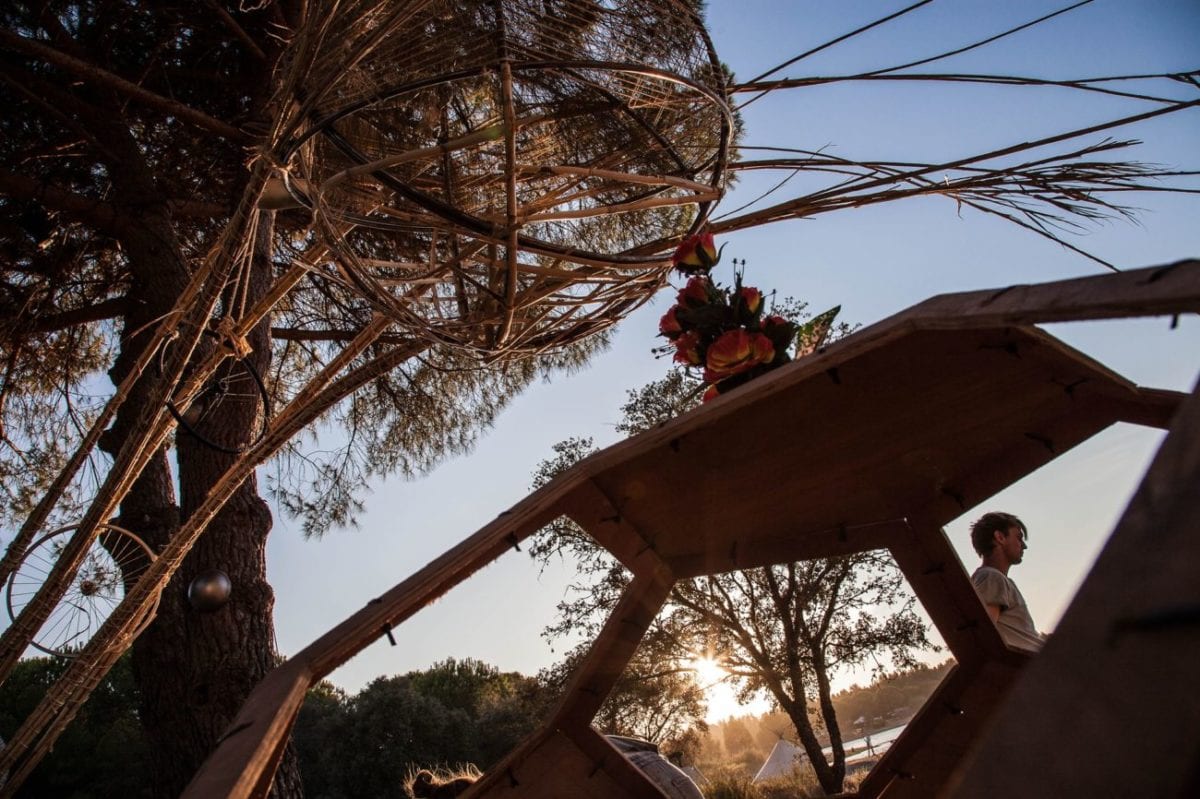 A lake in the middle of nowhere in Portugal, a reference to a cult Linklater film and some of the most enticing electronic DJs of the moment; festivals are often based on the same few pivotal elements and Waking Life’s recipe convinced us to make the trip. With a couple of thousands punters gathered around a big pond surrounded by a tall, lush forest and dusty plains, more often than not the impression was to have crossed the barrier between reality and fantasy.

At night the Milky Way’s spiralling arms felt almost within our reach and during the day the bushfire smokes veiling the sun behind thick opaque curtains evoked apocalyptic feelings, each of which became part of the everyday flow, helping the crowd give in completely to this otherworldly state of being.

If small-scale festivals usually focus on proportionate lineups, trying to offer a homogeneic musical journey, Waking Life’s approach felt different, scattering 70+ acts across three dance floors: a Giegling-curated line up at Outro Lado, and across the lake a minimal-house/techno stage (Floresta) complemented by an experimental floor (Praia) ; the latter, albeit being too close to Floresta, offering some of the most varied and daring sets. 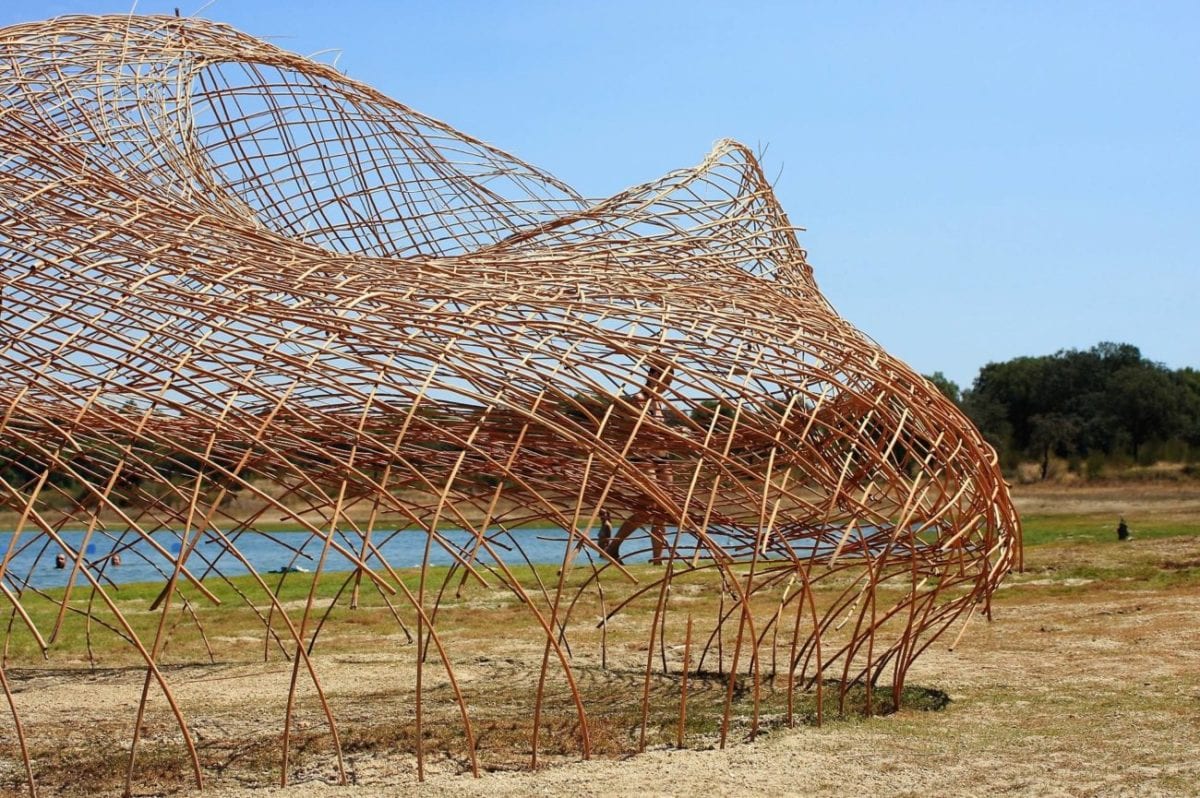 Darkness was already covering the place when we arrived on Wednesday shortly after midnight; we learnt to accept dust as our second skin as soon as the volunteers escorted us to the main area, where we were able to pitch our tents in one of the few remaining shaded spots. A huge egg-shaped space shuttle covered in fluorescent lights was peeking out in the distance, generating a strong feeling of anticipation for the following days.

While waiting for the dances to kick off, we joined the many sunbathers and swimmers to balance the 40+ degrees constantly hitting our heads. The lake was a playground by itself, with pirate boats, floating installations and a cable raft connecting the two main stages across.

When Leafar Legov started his live set in front of a drowsy crowd, it was the festival’s dawn and a soft wind curled the water and rose above, then merging with the producer’s biological blends of sampled cracks turned into soft kicks and therapeutic soundscapes.

German duo Manamana took over at sunset with an extended set of dancefloor-oriented thumping tracks that shook off the general daze. Later that night at the Praia floor (covered with Persian carpets and surrounded by stands shielding secret rooms) Bunker’s founder Brian Kasenic masterfully meshed ambient escapes with memorable tracks from Suzanne Ciani and Coil, with people rolling, jumping or even practicing yoga and capoeira.

We waited for the end of Sebastian Mullaert’s funky live, eager to hear Luigi Tozzi’s sunrise set at the Floresta floor, who showed us the way towards further profound and obscure realms. The water in the back of Tozzi reflected the smokey pink colours of the dawn, projecting us in an upside-down water world where techno mermaids enchanted the passers-by with their laments. 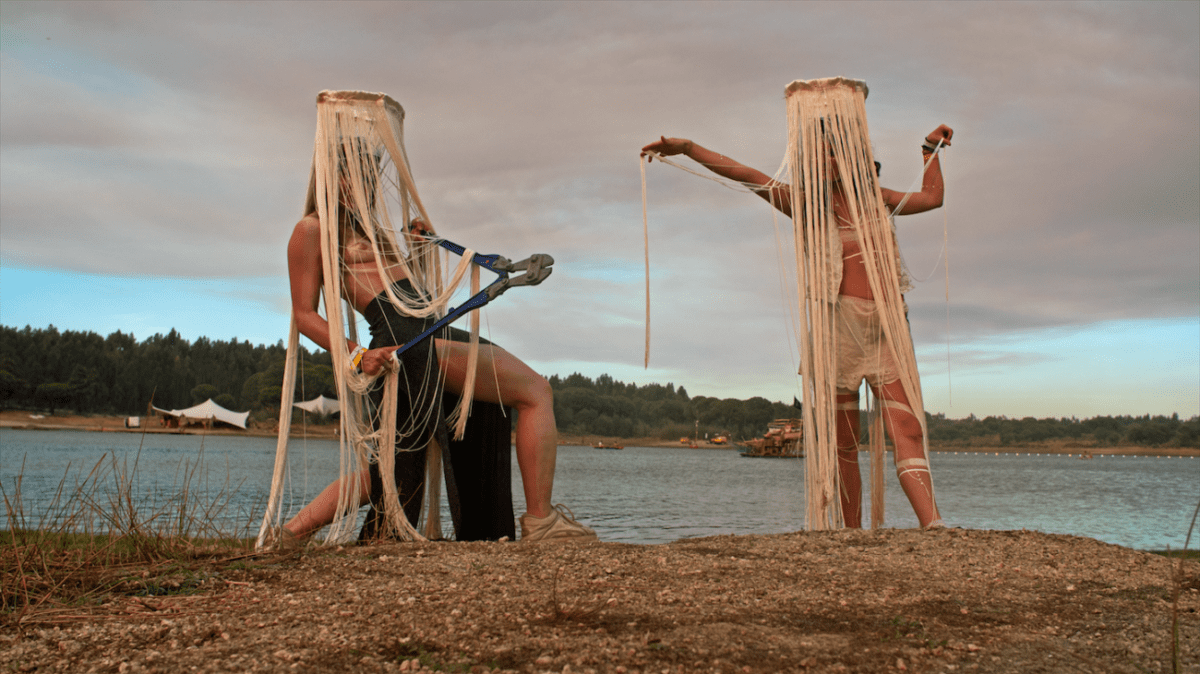 Friday started at Praia, where we discovered Menica, a rainbow-dressed girl sitting in front of her turntables strumming psychedelic and oriental chords (Funkadelic’s ‘Maggot Brain‘ caught our ear); a soulful start to the day.

At the Foresta, Jennifer Cardini was slowly and steadily entrancing the devoted crowd with downbeat, cosmic-tinged grooves. The Outro Lado was calling us again, with early ambient sets from Drama, Birds & Tapes and BifiBoy who, a few days after being added to the line up, surprisingly invoked the freak spirit of CocoRosie with a powerful weeping interpretation.

Even though still early in the day, the sun was a smudged shape above the stage, fogged by the daily bushfire smokes whirling around Crato. The afternoon continued with one of the promised highlights of the festival. Kettenkarussell once again met the expectations and tied the initially disjointed crowd into a magical bundle of dancing and smiling people: a five-hour ode to crispy tunes, heartfelt melodies and uncanny vocals all trademark to the Giegling signature sound which so tremendously contributed to the musical concept of Waking Life.

The night was introduced by Ben UFO who kept the crowd going, taking it into sheer UK bass sound realms, with occasional jungle and reggae escapades. The night came to closure at Praia where Acid Acid was laying down an equally heavy and soothing mix of guitar drones, immersing the carpet floor into psychedelic dreamlands. Dorisburg’s astonishing lunar live act was our cue for the end of the day as the sun started rising in the Eastern part of the sky.

Much like the natural order of things, the festival’s mood seemed to be closely coupled with the movements of the sun. Even though the heat was relentless, the daytime was brimming with energy and excitement and the lake was the perfect counterpoint to every moment of fatigue. Nights on the other hand were more static and oriented to general relaxation. The two main stages didn’t always deliver the same magical atmosphere as in the daytime, mainly because of a combination of natural weariness, unnecessarily loud and aggressive club-oriented selections by DJs at times, insufficient lighting in some key spots.

Luckily there were plenty of alternative activities when the music wasn’t subjectively on point. People took advantage of the few hours of favourable temperatures to sleep, recover, watch a film at one of the popup cinemas, admire the projections on the colossal water fountains displayed in the middle of the lake or interact with installations. 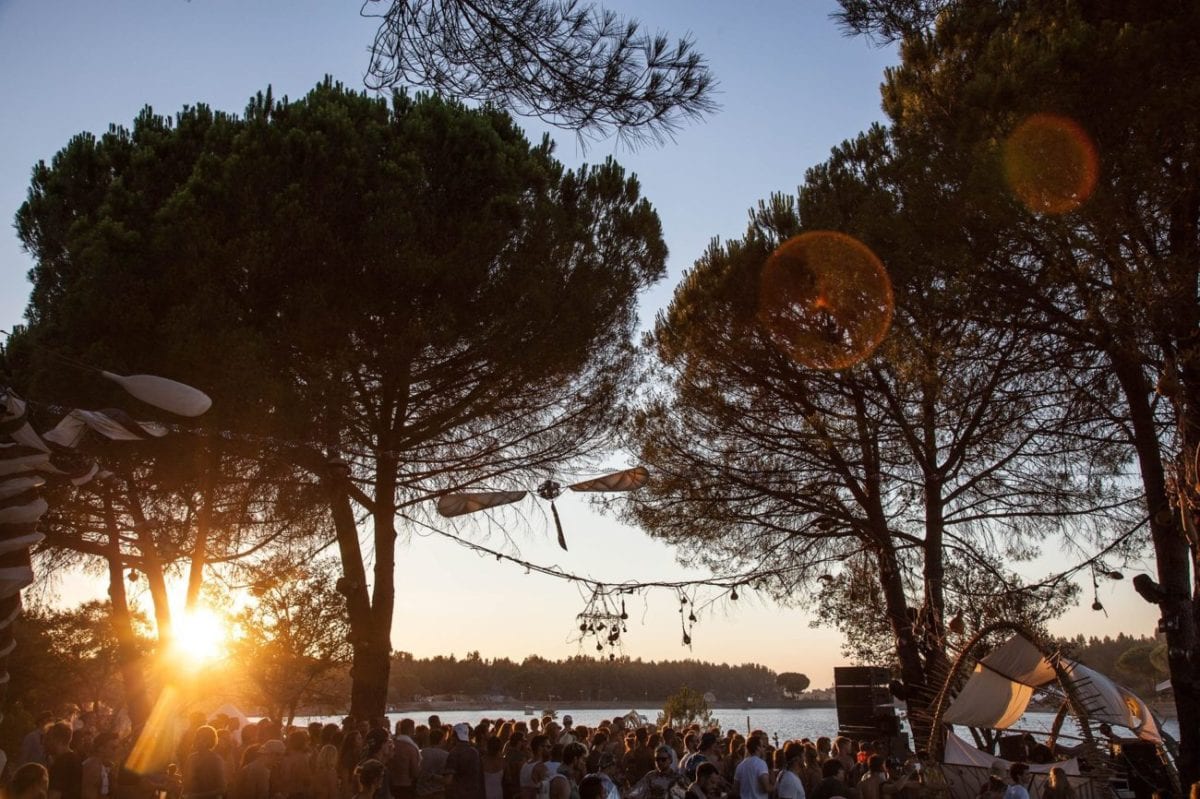 On Saturday Ulf Eriksson took over the lethargic Outro Lado stage and jump-started the day vigorously with creeping electrical force made of ample basslines and deep kicks, that grew steadily and captured everyone’s attention until the very last beat on Kris Wadsworth’s stunning ‘Uranus 222’.

Bryan Kasenic then took helm of the Outro Lado stage for the entire Saturday afternoon, with a mix of evergreen classics, by the likes of Matthew Herbert and Radio Slave, and crispy stylish house cuts. It didn’t take long before everyone got into frantic dancing action, while we got to witness the first clear sunset of the festival as the bushfires had finally stopped. An unexpected change of programme left us and others disappointed as we missed Aleksi Perala’s live the same evening. That night was used to reload the batteries as we went to sleep early, the Zenker Brothers having failed to make the impression with their pounding 4/4 kicks.

Fennesz and Philip Jeck’s live sets on Sunday were amongst the most bewildering moments of the week. Despite the lack of dancing, their patented sonic multiverses left the early-afternoon crowd baffled. Having developed their musical idiosyncrasies over the course of intense decades of activity, they showed true to their outstanding studio craft, effortlessly managing to create a special moment, track after track.

Fennesz’s hour of drones on Saturday finished with stumping sounds that felt like giants approaching and a couple of dancers rose to release the cathartic energy accumulated on the sitting floor (“I didn’t know what to do, so I ended up doing techno”, he murmured at the end). Jeck’s polymorphic blends of samples, extraterrestrial soundscapes and church bell chimes then resonated through his pair of old turntables, with people sacrificing in return to protect him of the hard-hitting sun as they gathered to create shade above his head; exactly what we were looking for to start this last day of the festival.

As the end approaches a festival, there are mixed feelings of increasing connectedness with everyone else there and premonitory nostalgia about the inevitable transition. The festival crowd seemed to be in a resting mood after the heated previous days and nights. Dustin and Lawrence‘s closing sets embraced this spirit, renouncing the loudness of the nights before in favour of smooth volumes and conciliating transitions, creating night-time magic until the early hours with their array of bossanova, hip-hop, deep house and R&B wonders. 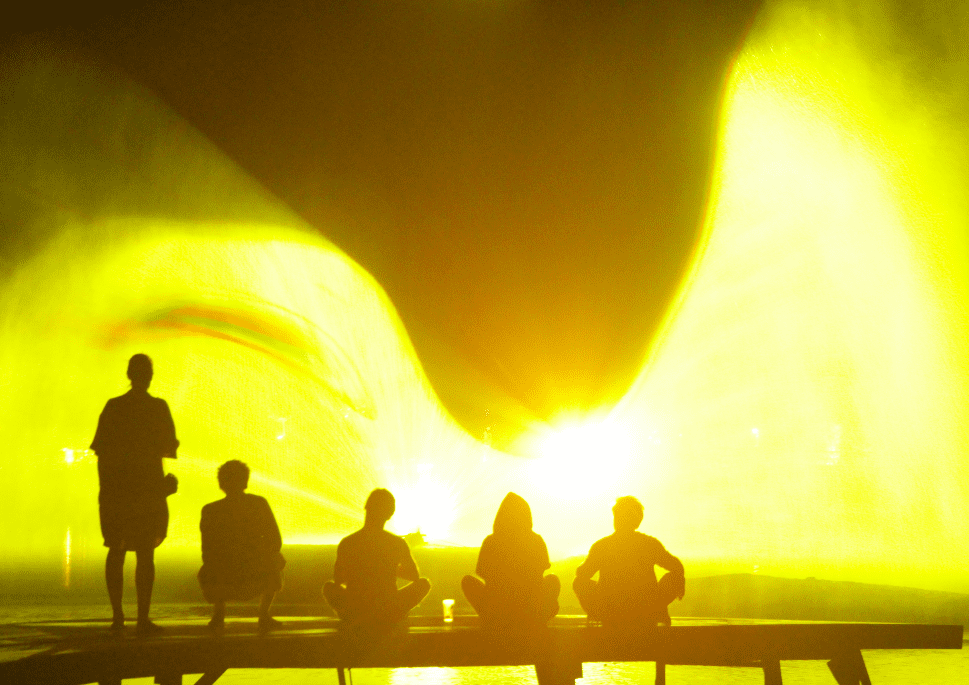 Nowadays, newborn festivals emerge with a mixed bag of promises and things to look out for, borrowing and improving formulas from other likeminded events in the alchemical quest of finding their own working identities.

Waking Life’s inspirations are no mystery to the classic festival attendee, but this first edition certainly found its character: not in any single aspect of the event, but mainly in the strong feeling of care for the environment and understanding for the visitors oozing out of every feature, leaving many people visibly impressed both at the festival and in the online echo chamber.

The stomach flu that hit some participants during the last day, and most of them in the aftermath, could have been a strong blowback for the organisers and any future editions of any festival – nonetheless many took the chance to thank and cherish the event publicly for its success, despite being stranded in illness. 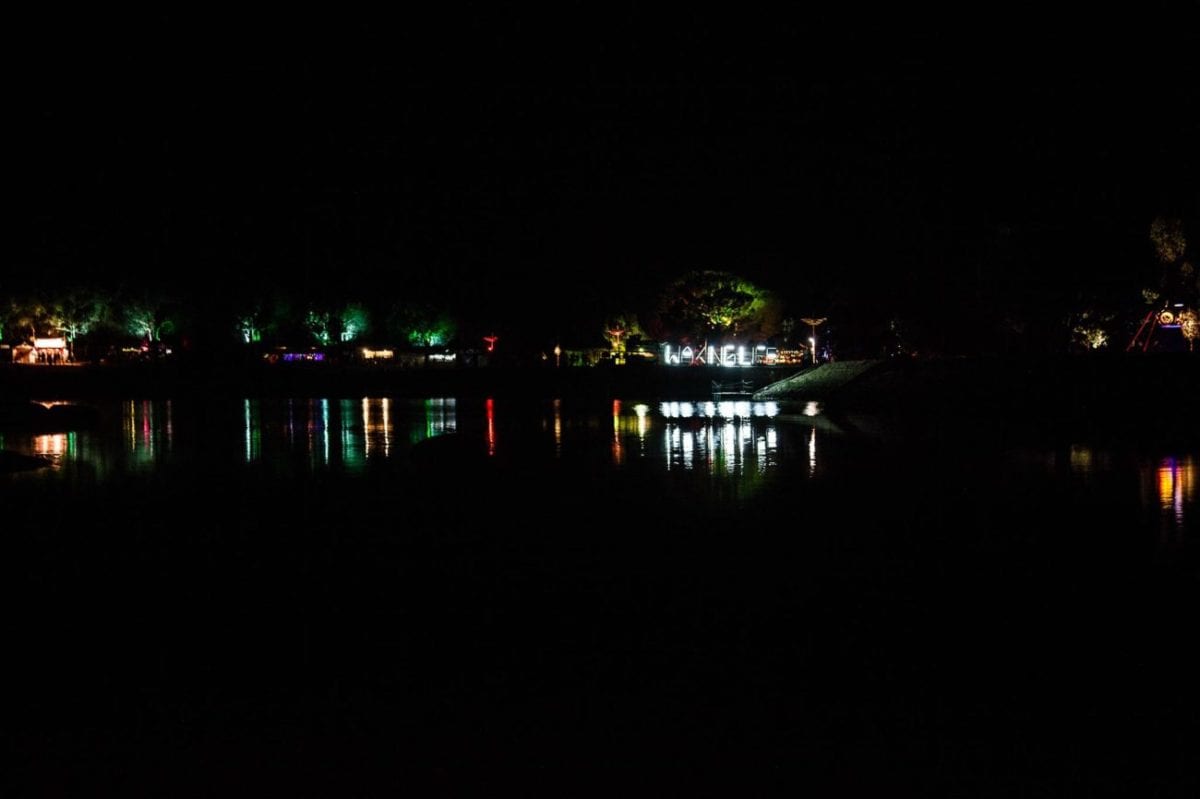 The overall Waking Life experience was one of constant discovery and wonder, where circumstances and occurrences didn’t ever feel forced, but rather brought up cunningly and savoured by the unconscious, allowing the controlling mind a break and the senses to enjoy freely. This aspect may sound like new-age talk to some, but it plays a fundamental role in creating the general festival streams that eventually take hold of everyone.

By the end of the four days, the Waking Life logo flickering over the lake at night started to be more than just a post-modern reference – the oneiric spirit of the site, with its myriad of surprising installations and hidden treasures (every little bit revealing the organisers’ passion and hard work), the many performers popping up and carrying everyone along in their fantasy, the full batches of genuine music and fun-loving human beings, the surreal natural habitat sheltering the gathering, perhaps even the organisational issues and hiccups, and finally the music connecting all the dots.

Waking Life helped everyone attune not only to the outside world but above all to their inner ones, awakening latent feelings of cosmical oneness, that all humans intrinsically possess, instilling strength and hope to be carried away from the festival and spread on a daily basis. 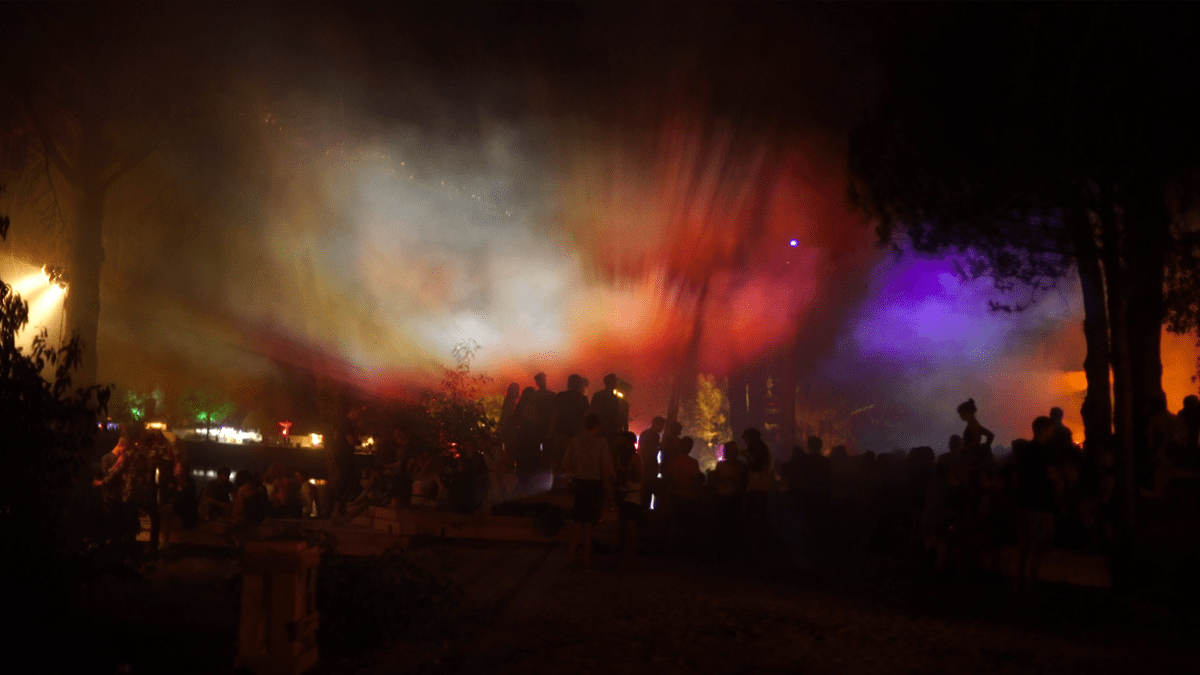 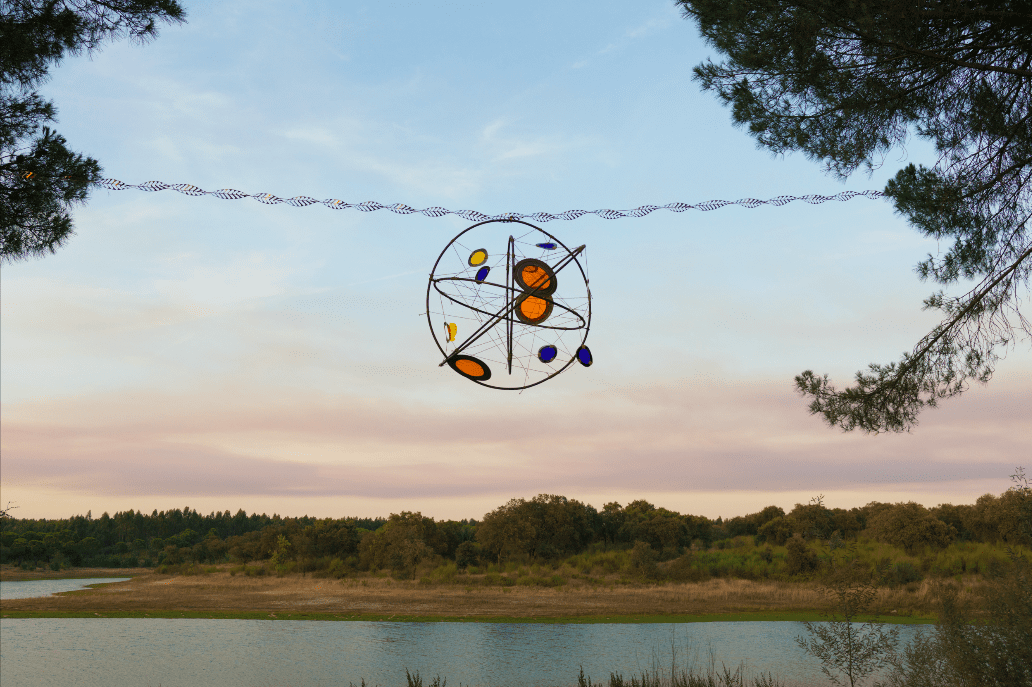