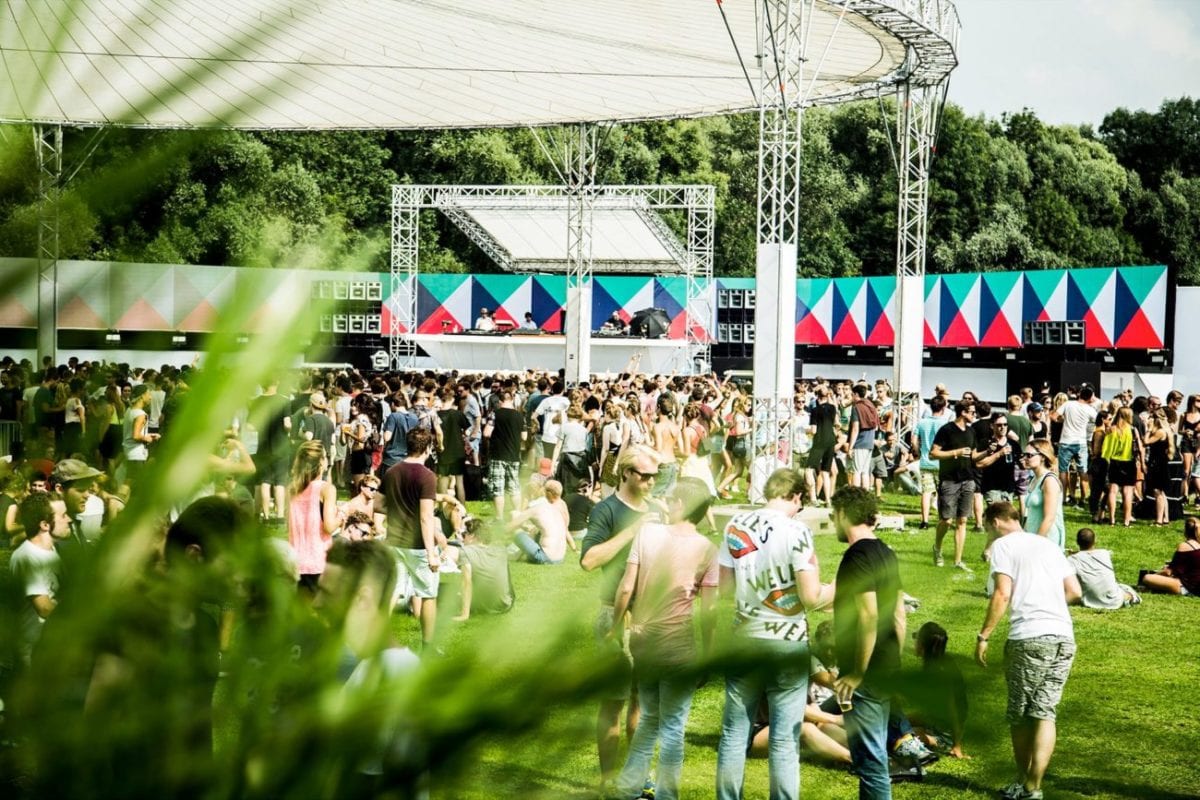 Less than a month to go till the start of Dekmantel! The world-renowned festival will take place in Amsterdam from 4 to 7 August, with both massive day and night lineups to keep your legs swinging non stop. Once again la crème de la crème of electronic music will be gathering in the Dutch capital, covering a vast range of genres and offering to the participants a monster menu with more than a hundred live performances, DJ sets, B2B and other delights.

As we still can’t enjoy the power of ubiquity, and if you’re a bit lost when looking at all the wonders on display, here’s our essential guide to Dekmantel 2016, from the most obvious picks to the perhaps lesser known greats who’ll get to mess with your body and mind for four days of sheer chill and ecstatic dancing.

Tough to pick a favourite from the curtain-raising acts this year. Mentioning Cabaret Voltaire should be enough to give you goosebumps: the English band has been shaping the evolution of  electro-industrial since their debut in the Seventies till the mid Nineties, starting from psychedelic funk and world music to become one of the pioneers of new wave. A rare chance to see this chunk of electronic music history live… Oh, and we almost forgot that Border Community captain James Holden will close the night with a hour-long live. You know what to do.

Bringing the Afrobeat heat to Tolhuistuin (Paradiso Noord), Tony Allen is largely recognised as one of the finest drummers ever; part of Africa 70 with Fela Kuti, the Nigerian legend and his band will make sure the afro boogie vibe resonates deep. Brazilian jazz-funk trio Azymuth will warm up the crowd with their samba doido and a special (and free) clubnight featuring Cómeme honcho Matias Aguayo, Woody and first-class local DJ Young Marco will follow to throw the party-heads into dance floor nirvana.

Last but not least, Nonplace Burnt Friedman & Jaki Liebezeit will take over the famous jazz club Bimhuis, lacing up heated synthlines with Dionysiac drums to enchant the nightly bohemians. The pair will be followed by Italian multi-instrumentalistAlessandro Cortini, known for being the keyboardist of Nine Inch Nails and having released a handful of quality ambient and drone records on Hospital Productions.

If you still didn’t have the chance to participate in raster-noton‘s 20th anniversary showcase yet, this might be the right time for you as Byetone, Kangding Ray and Grischa Lichtenberger will unleash their signature sleek and minimal audio and visual expansionism in the splendid futuristic setting of EYE. 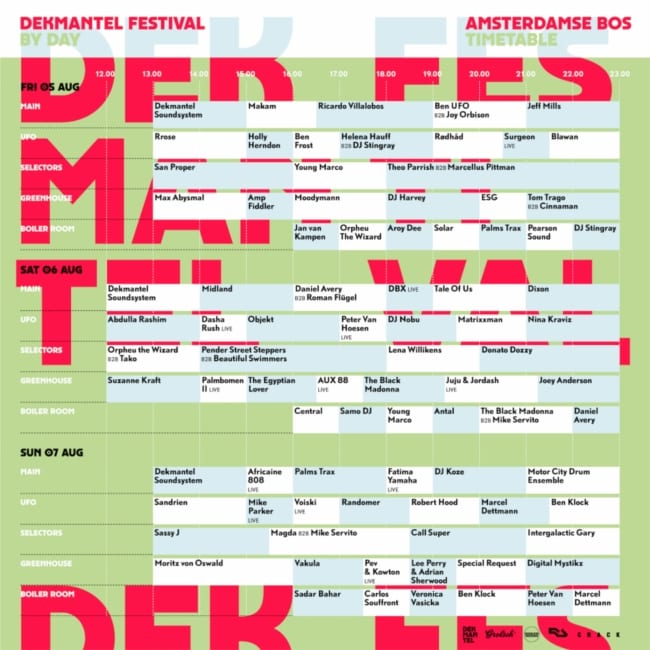 Detour off the Selectors stage to see Rush Hour staple San Proper break the day in with an extended 3 hour set. Expect an avalanche of space disco, soulful exotica and blazing funk chuggers. Whether you’re more of a techno head or house kind of person, Chilean warlock Ricardo Villalobos and Detroit legend Moodymann won’t fail at focusing on the attention of Friday attendants. From the deep grooves of the Perlon affiliate to Kenny Dixon’s hyper sensuous melters, the bar is set into stratospheric heights already.

Following up to Icelandic ambient producer Ben Frost‘s set on the UFO stage, Helena Hauff and DJ Stingray team up for a one-off two hour B2B that promises to be nothing but hectic given the wild nature of these two! That’s before disco sensei DJ Harvey takes over the Greenhouse for a no-miss set which should bring its own memorable share of fervid, slow-burning rhythms and opiated disco-funk rollers.

Ben UFO B2B Joy Orbison is another highlight of the day, and it’s impossible to even imagine the two of them not tearing up the floor as they’ve been so effortlessly doing over the past few years. With the broad scope they’re championing through their DJ sets, no doubt the heat will be up to scratch.

The rest of the night won’t take its foot off the accelerator. Sound Signature commodore Theo Parrish and Unirhythm boss Marcellus Pittman join forces for what is perhaps one of the craziest pairing of the four days. 5 hours of sheer Detroit house vibe set to ignite the woods big time. Bringing down the curtain on the main stage, the mighty Jeff Mills will operate his wizardry from 9pm to 11pm. Will two hours be enough?

If you’re headed to Melkweg, then be sure to not miss on the Viewlexx showcase featuring Intergalactic Gary, Legowelt live and obviously label head I-F himself, who’ll be bringing the trip to its last stretch. Tama Sumo and Lakuti will bring a more vibey, trance-inducing magic to the Theater Zaal stage. 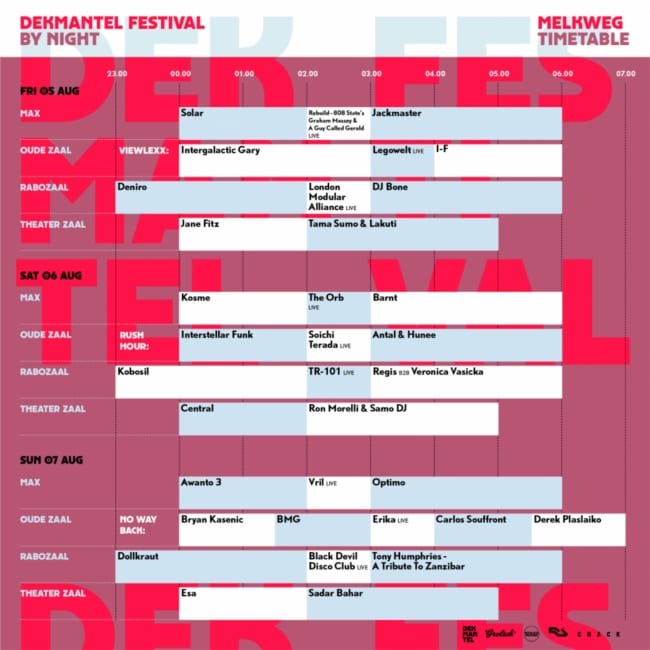 Recharge you batteries with a healthy lunch in the historic Amsterdam and be quick: Suzanne Kraft will pave the way from 12:00 to 2 pm before Palmbomen II takes the helm, and who better than Herrera and Hugo can softly warm your muscles with their solar-powered lo-fi, acid house and balearic blend before the afternoon fully takes off.

Pop by the UFO stage to see the ever forward-pushing Objekt perform. The Berlin-based producer who recently appeared on Tresor with the wonderful ‘Kern.Vol 3‘ compilation, has gained international praise for his challenging pieces bridging the gap between electro, techno, breakbeat and experimental realms.

If you’re more of a house addict, Pender Street Steppers B2B Beautiful Swimmers will certainly do more than just fulfill your desires. Crossing paths from Vancouver to Washington, the double pair will get the chilled house groovers flowing aplenty, draping the natural surroundings of the Amsterdamse Bos in breezy folds.

Salon des Amateurs resident Lena Willikens, rightly considered as one of Europe’s best selectors with her sets ranging from mellow folk songs to dark hypnotic techno will entrance the crowd with her fine skills as Dekmantel regulars Juju and Jordash will put their epic live into practice, tried and tested in the best clubs and festivals of the world.

Saturday night program also brims with dopeness, but if some highlights such as Ron Morelli remain as unpredictable as ingenious – whether he drops noise rock or Chicago house, Magazine founder Barnt shall once again deliver an impeccable mix of wonky techno rhythms, whilst Japanese legend Soichi Terada will drag you into his lush, brightly-hued house realm and Born Free boss Samo DJ will bring his offbeat techno grooves to simmer. 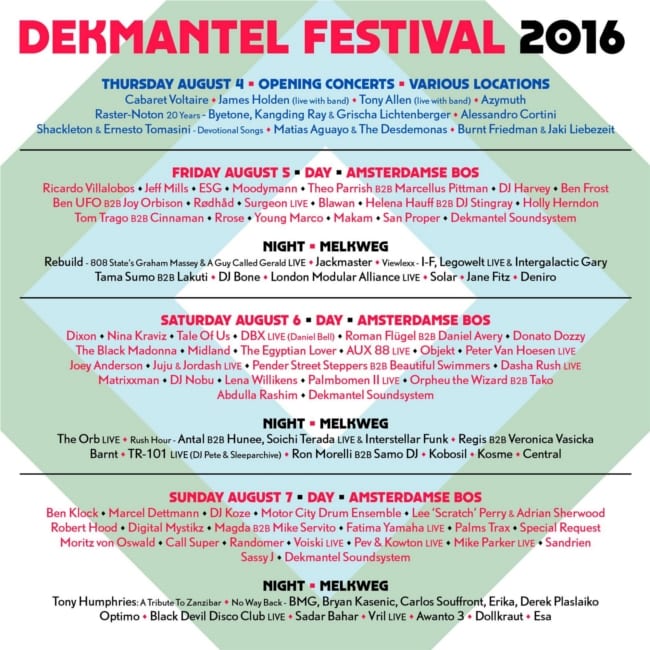 For the final day of the festival, things get more techno-ey than ever on the UFO stage. New Dekmantel signing Voiski steps up with an exciting hour-long live, which we’re very much looking forward to. He’ll be followed by L.I.E.S. companion Randomer before 4/4 fury fully steps up as Detroit don Robert Hood will be joined by Berghain pacesetters Marcel Dettman and Ben Klock for a stunning late show.

The Greenhouse won’t be outdone and will propose a very alluring 3 hour live set from dub master Moritz von Oswald to start the day in the best possible way. Ukrainian producer Vakula, whose album ‘Cyclicality Between Procyon & Gomeisa‘ just hit the stores via Dekmantel, promises to be one of the acts to watch. Dub and all its branches will be celebrated. Livity staples Pev & Kowton will deliver a special one-hour live set, Carib Gems and Pressure Sounds boss Adrian Sherwood will be joined by Jamaican legend Lee Perry for an exceptional performance.

Rocking the Melkweg in a last-ditch, we expect nothing but a mad ending from Giegling mainstay Vril, known for the quality of his live sets. Glasgow’s Optimo should be another highlight of the night, with the pair dispensing their ever-tasteful, wide-scope groove science. The Rabozaal room will be the stage to another pair of rare appearances from long-standing disco operator Black Devil Disco Club and Zanzibar Club legend Tony Humphries.